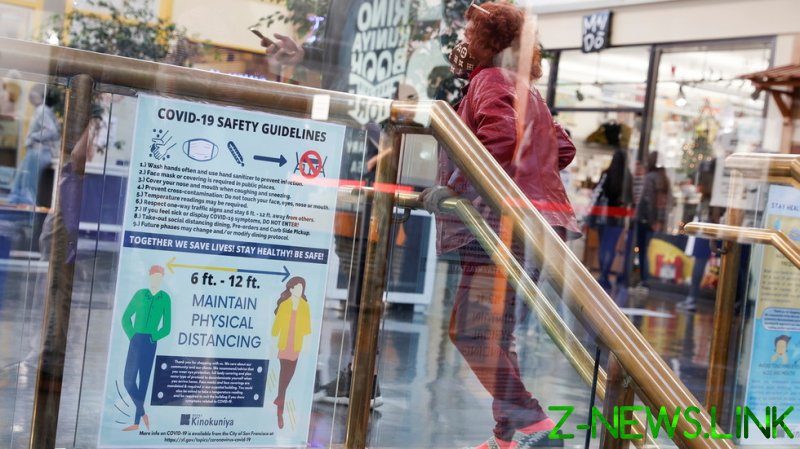 The revived mandates were imposed on Monday in the counties of San Francisco, Alameda, Contra Costa, Marin, San Mateo, Santa Clara and Sonoma, as well as the city of Berkeley, each announcing the move in similarly worded statements. Set to take effect on Tuesday, the measures apply regardless of residents’ vaccination status.

“Indoor masking is a temporary measure that will help us deal with the Delta variant, which is causing a sharp increase in cases, and we know increases in hospitalizations and deaths will follow,” said San Francisco’s acting health officer Naveena Bobba. “When we all wear face coverings indoors, we are protecting our fellow residents and helping our healthcare workers.”

While the officials in all eight regions maintained that vaccination protects against severe illness from Covid-19, they also acknowledged a growing number of cases among the immunized, with Berkeley’s health department warning that “the proportion of post-vaccination infections is increasing” thanks to the more contagious Delta variant.

The new mandates across the Bay Area follow a similar move in Los Angeles County, which became the first in the state to reimpose an indoor mask requirement in mid-July, just weeks after California emerged from a lengthy lockdown. LA officials cited a surge in daily cases at the time, while the county’s health officer suggested more restrictions could be needed, saying “anything is on the table.”

The Bay Area officials also cited a revised masking guidance issued last month by the Centers for Disease Control and Prevention (CDC), which recommended universal indoor face coverings in regions with “substantial” or “high” viral transmission. It based the decision on a recent study suggesting that the coronavirus vaccines currently approved for emergency use may not protect against the Delta variant as much as previously thought. Of 469 cases studied, 74% of the patients were fully vaccinated, while 79% of those developed symptoms. A total of five patients were also hospitalized, four of which were fully immunized.

The updated CDC guidance has triggered a spate of fresh mask mandates across US states, counties and cities, as well as a new requirement in the US Capitol. The Joe Biden administration has also since mandated coronavirus vaccines for federal employees, citing the Delta surge, while his CDC director Rochelle Walensky turned heads last week after telling Fox’s Bret Baier that the government is “looking into” a full-on federal vaccine mandate. Though Biden’s DOJ recently concluded that such requirements would be legal, Walensky later clarified in a tweet that “there will be no nationwide mandate.”