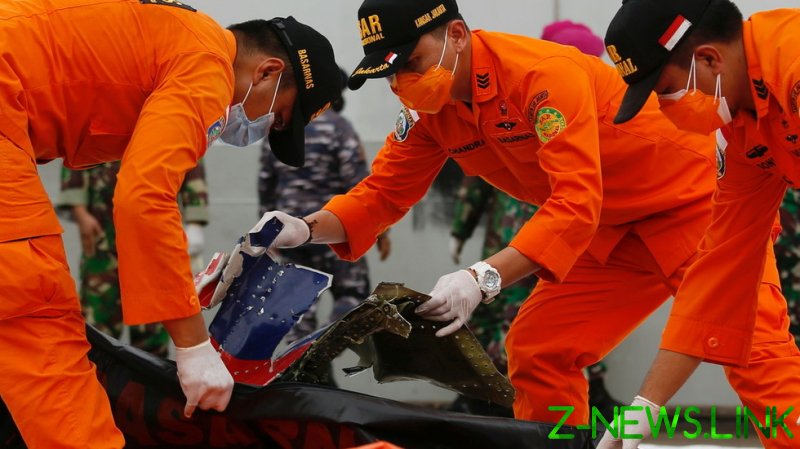 Indonesian divers on Sunday took advantage of favorable weather and visibility conditions, allowing them to locate parts of the wreckage. Indonesian officials said that they recovered broken pieces of the fuselage with aircraft registration parts 23 meters (75 feet) below the Java Sea.

Rescue workers earlier found small pieces of debris from the plane, as well as body parts and pieces of clothing.

Indonesian rescue members inspect what is believed to be the remains of the Sriwijaya Air plane flight SJ182, which crashed into the sea, at Jakarta International Container Terminal port in Jakarta, Indonesia, January 10, 2021. ©  REUTERS/Ajeng Dinar Ulfiana

Indonesian-operated Sriwijaya Air Flight 182 went missing on Saturday afternoon while traveling from Jakarta to Pontianak in West Kalimantan province. The plane reportedly experienced an hour delay before takeoff, and then disappeared from radar four minutes after becoming airborne. Authorities are still investigating what caused the tragic accident. Officials say the initial delay was due to bad weather and that a maintenance report stated that there were no issues with the aircraft before the fatal flight.

The Boeing 737-500 was carrying 62 people, including seven children and three babies. No survivors have been found.

The crash marks the worst air accident for Indonesia since the Lion Air tragedy in October 2018, when a Boeing 737 MAX 8 jet crashed into the Java Sea shortly after taking off from Jakarta. All 189 people on board were killed. The accident, followed by another crash in Ethiopia involving the same plane model, led to the grounding of the MAX 8 for nearly two years over concerns about the aircraft’s automated flight-control system.