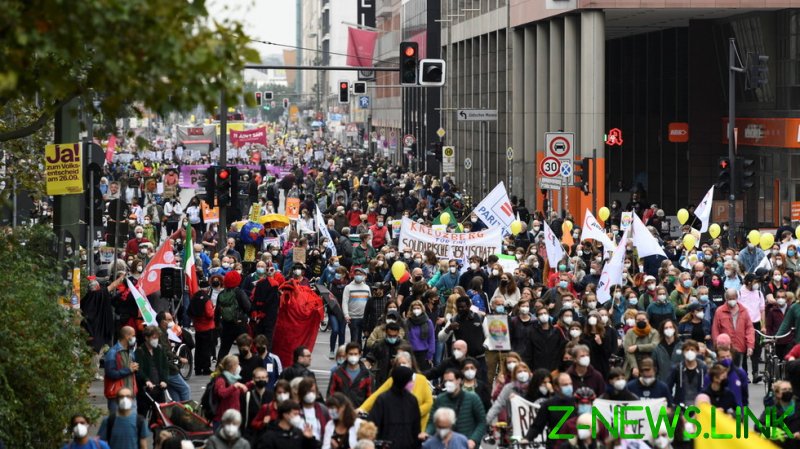 Around 10,000 demonstrators marched through Berlin’s streets, the police told the German media. The organizers of the event said that up to 30,000 people registered for the event held under the slogan ‘Indivisible! For a just and caring society’.

The march was organized by a host of various NGOs, civic movements and trade unions, ranging from the German Children’s Fund, Amnesty International and Fridays for Future to the German federation of trade unions and the Berlin tenants’ association.

“We have been on the street with 30,000 [demonstrators] and have set a clear signal for change and for a society that is based on solidarity, justice and anti-racism,” said the ‘Indivisible’ initiative’s spokeswoman, Rebecca Rahe. “Amid the crises of our time: the Covid-19 crisis, the [situation in] Afghanistan and the climate crisis, we have shown that we are indivisible and have made it clear to many thousands of people that we stand for real change,” she added.

The procession that spanned over several kilometers walked through Berlin’s Tiergarten park and the Brandenburg Gate as the demonstrators marched through the city center. The participants of the march demanded a real democracy, “which guarantees real participation for everyone and which everyone can help shape,” as one of the event organizers, Anna Spangenberg, said.

Demands on the government to “finally tackle the climate crisis in a consistent and socially just way” as well as to “seriously” fight racism and misanthropy were also on the demonstrators’ list. Although the rally participants were holding large banners that read ‘Indivisible’ at the front of the marching column, many organizations that joined the event also came up with some demands of their own.

The German trade unions were demanding better and fairer working conditions. Amnesty International called for an end to torture and ill-treatment. Various feminist groups demanded rights for women, including the right to abortion. Some groups were also calling on the Berlin authorities to stop the gentrification of some city districts and halt the eviction of the homeless from some makeshift camps in several areas.

German left-leaning political parties, including the Left Party, the Greens and the Social Democrats, joined the march as well.

Some protesters were also demonstrating against the German right-wing Alternative for Germany (AfD) party. Placards reading ‘One, who votes for AfD, votes for Nazis’ were seen during the march as well.

Some groups also used the occasion to remind the world about the issues that lie far beyond the German borders. Opponents of the Brazilian President Jair Bolsonaro and supporters of Syria’s mostly-Kurdish YPG militia were seen in the crowd alongside various pro-asylum groups that came out with slogans saying ‘2015 should be repeated’.

The march went peacefully and the Berlin police that deployed some 1,000 officers to maintain order during the event commended the demonstrators for sticking to the Covid-19 rules. Most demonstrators were wearing masks and kept social distance, the police said after the event, adding that there were no reasons for the officers to intervene and halt the march.