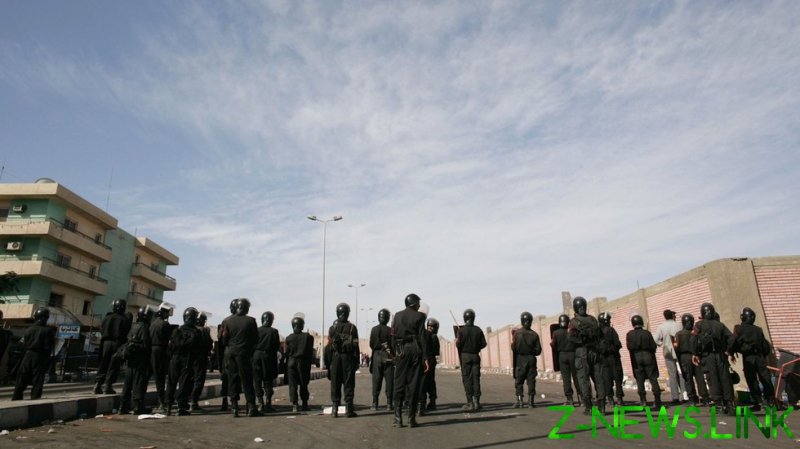 On June 22, it was announced that four executives at French companies had been charged with “complicity in acts of torture” over allegations they’d helped North African authorities spy on opposition figures who were subsequently detained and tortured.

The development was widely reported by the media, although very few outlets mentioned that Amesys’ deal with Libya was inked at a time of improved relations between Paris and Tripoli, which included a formal meeting between Gaddafi and then-President Nicolas Sarkozy in December 2007. It’s since been alleged that Sarkozy’s election campaign that year received up to €50 million in illicit payments from the Libyan state, and in March 2018 he was charged with corruption offences.

Conversely, entirely absent from mainstream coverage was any consideration of the fact that supporting dictators in Africa is not only very much de rigueur for France, but in fact has been the country’s official policy for decades.

Known as ‘Françafrique’, it was inaugurated in 1959, when Paris began granting autonomy to its former colonies and imperial holdings the world over – in many soon-to-be states, this followed years of brutal armed struggles for independence, while in others, most notoriously Algeria, conflicts raged for some time thereafter. That same year, President Charles de Gaulle created a dedicated unit – dubbed the ‘African cell’ – that reported directly to him, and was charged with maintaining the country’s economic influence over its ‘pré carré’ (backyard).

Ever since, France has attempted to uphold this clout via expansive political, commercial, financial, military, and intelligence networks spread across the continent, sustaining compliant, corrupt, and repressive governments in power by way of rigged elections, coups, assassinations, and military action. Between 1960 and 2020, Paris launched 50 separate overt interventions to protect its chosen leaders in Africa. Figures for clandestine activities conducted during this time are unavailable.

Chad offers a particularly palpable example of Françafriquein action. Despite ostensibly gaining independence in August 1960, the country has seen troops regularly dispatched to it ever since, in order to protect successive dictatorships and enforce their rule.

In May 2016, the Extraordinary African Chambers found Hissene Habre, the president of Chad between 1982 and 1990, guilty of rape, sexual slavery, and orchestrating the murder of at least 40,000 people during his tenure as leader, sentencing him to life in prison in Senegal. Prior to his violent seizure of power, he’d spent many years leading the Command Council of the Armed Forces of the North, a rebel militia that carried out numerous atrocities and became internationally infamous for taking Europeans hostage.

Notably, in 1974, the Council kidnapped French archaeologist Françoise Claustre – the next year, France dispatched Major Pierre Galopin, advisor to Chad’s then-President Ngarta Tombalbaye, to negotiate her release. He was instead taken hostage, and then executed by Habre’s forces mere days before Tombalbaye himself was assassinated by army officers.

However, Paris chose to embrace Habre, providing his government with extensive military and intelligence backing, helping the regime crush internal upheaval and attempted incursions by Libyan troops in the north of the country. Moreover, the Directorate-General for External Security (DGSE), France’s foreign intelligence service, provided wide-ranging training and support to the president’s newly-created secret police, the Documentation and Security Directorate (DDS), sometimes on its own soil.

Methods of torture commonly used by the DDS included burning detainees with flaming objects, spraying gas into their eyes, ears, and nose, compelling them to swallow excessive amounts of water, and forcing their mouths around exhaust pipes of running cars. The agency’s files, recovered by Human Rights Watch in 2001, reveal at least 1,208 were killed or died in detention, and 12,321 were victims of serious human rights violations.

In 1983, France launched Operation Manta, its largest military engagement in Africa since the Algerian war of independence, to suppress Libyan-backed rebel factions in Chad. In the process, French troops were directly implicated in numerous grave abuses committed by government forces, and French aircraft were used to transport captured enemy soldiers for interrogation, torture, and execution.

Three years later, Operation Epervier was instigated to again defend against advancing Libyan forces – France thereafter maintained a permanent military presence in Chad until 2014, with thousands of troops and a constellation of military bases dotted across the country. The operation’s assets proved decisive in assisting then-President Idriss Deby Itno to stave off rebel assaults on N’Djamena, the country’s capital.

Itno – who ousted Habre in 1990 – was one of many Chadians who received military training in France. He was killed in April while commanding forces fighting against rebels, 10 days after winning his sixth presidential election by landslide, in a vote widely criticized as a sham – “I know in advance that I will win, as I have done for the last 30 years,” he said on the campaign trail.

His funeral was attended by French President Emmanuel Macron, along with the leaders of Burkina Faso, Mauritania, Mali, and Niger – all states currently hosting French troops under the auspices of Operation Barkhane, which extended the tendrils of Operation Epervier across the Sahel region. Their presence is increasingly unwelcome to local populations, and has led to sizable protests, although it’s unlikely they’ll be leaving anytime soon. As former President Jacques Chirac said in 2008, “without Africa, France will slide down into the rank of a third [world] power” – a perspective reaffirmed by an official 2013 French Senate report, titled ‘Africa is Our Future’.

As such, the trials of the indicted French executives could yield some very interesting disclosures indeed – including whether their provision of surveillance equipment to the governments of Egypt and Libya were greenlit, or even outright directed, by French politicians, spies, and/or military officers.

If not, then at the very least they have plenty to offer in their defence. According to the UK Foreign, Commonwealth, and Development Office, Egyptian President al-Sisi’s rule since seizing power in a bloody coup in 2013 has been typified by ever-escalating torture, police brutality, forced disappearances, deaths in detention, and other horrors. Of the country’s approximate 106,000-strong prison population, 60,000 are political prisoners, and national security laws allow individuals to be incarcerated without charge or trial for up to two years.

Yet, it was only in December 2020 that Macron hosted al-Sisi on a three-day state visit to Paris. The butcher of Cairo thanked his “dear friend” for the “warm welcome” he’d received, while the president rejected calls to tie arms sales to Egypt to human rights. One can’t help but be reminded of Balzac’s observation that “manners are the hypocrisy of nations,” or indeed La Rochefoucauld’s that “we confess to little faults only to persuade ourselves we have no great ones.”