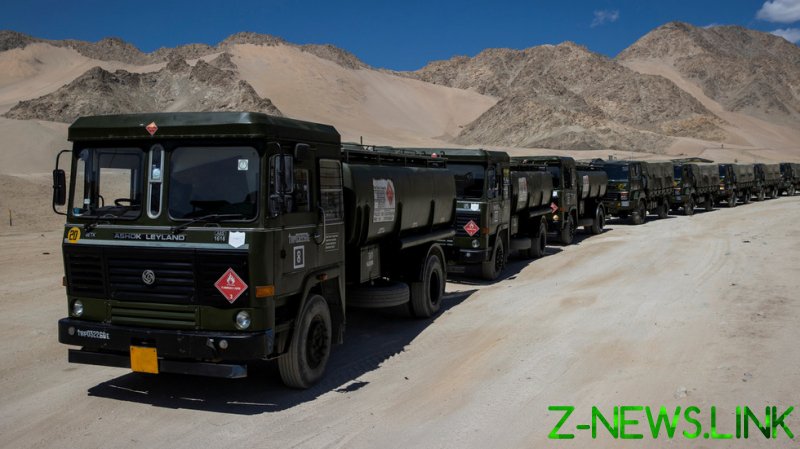 Speaking during the annual Army Day press conference on Tuesday, General Manoj Mukund Naravane said the military was ready to take on any threat, both internal and external. They remain on high alert along the country’s borders, he said, particularly in the northern region of Ladakh, whose status is disputed with China. The mountainous region was the scene of a major flare-up between the two countries last summer, with at least 20 Indian soldiers killed during the violent escalation.

“We have gone into a winter deployment situation and we are left all along the boundary. We are hoping for a peaceful solution, but we are ready to meet any eventuality. All logistics are taken care of,” Naravane stated, alleging that Beijing has constructed additional infrastructure in the disputed area.

The official also took a jab at India’s arch-enemy – and China’s regional ally – Pakistan, yet again accusing it of sponsoring terrorist activities and warning that such behavior will not be tolerated.

“Pakistan and China together form a potent threat. Every year, the PLA [People’s Liberation Army] come to their traditional areas, but those training areas have been vacated. The troops who had come to the Tibetan plateau have gone back. There is no reduction of troops from both sides at the friction points,” Naravane said.

The border dispute with China was also touched on by India’s Foreign Minister Subrahmanyam Jaishankar as he spoke at a Reuters Next conference on Tuesday. The deadly border clash has badly damaged the mutual trust between the two countries, he said.

“After 45 years, you’ve actually had bloodshed on the border,” the diplomat stated. “And that’s had a huge impact on public opinion and politically. …Really, the impact on trust and confidence in India where China and their relationship is concerned, that has been profoundly disturbed.”

India and China have repeatedly pinned the blame for stirring up border tensions on one another. Back in December, China’s foreign ministry reiterated that “the responsibility [for border tensions] lies squarely with the Indian side.” At the same time, Beijing maintains it is “committed to resolving the boundary issue through negotiation.”