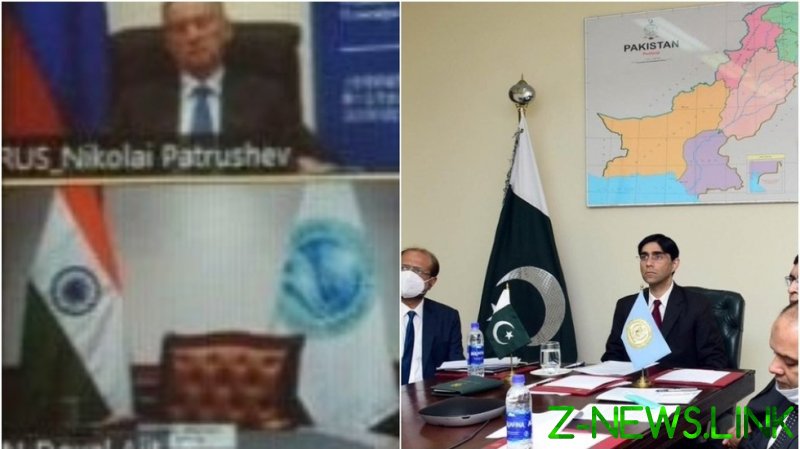 The national security adviser to the Indian government, Ajit Doval, abruptly walked out of a virtual SCO meeting hosted by its chair Russia. The incident happened because Pakistan had “deliberately projected a fictitious map that Pakistan has recently been propagating,” India’s Foreign Ministry spokesperson Anurag Srivastava explained.

He stated that Pakistan’s gesture violated “the norms of the meeting,” after which India decided leave “in protest at that juncture.”

A screenshot from the virtual meeting that was published in the Indian media showed an empty chair next to an Indian flag.

“The map reaffirms Pakistan’s commitment to the UN Security Council Resolutions and the supremacy of the UN Charter,” he told the media.

The Pakistani government unveiled its new “political map” last month, which showed the whole territory of disputed Kashmir as part of Pakistan. It also placed parts of India’s Gujarat State in Pakistan’s domain.
Prime Minister Imran Khan then said that the map illustrated the country’s “national aspirations” and affirmed the solidarity with the people of Kashmir.

The map was immediately denounced by New Delhi as “political absurdity” that had no legal basis.

The SCO was founded in 2001 by China, Russia, Kazakhstan, Uzbekistan, Kyrgyzstan and Tajikistan. India and Pakistan joined in 2017.