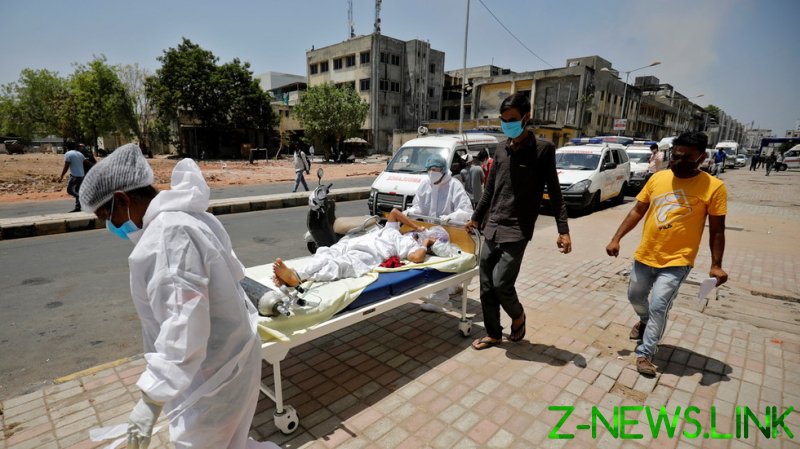 Indian health officials reported 314,835 new cases on Thursday, bringing its total infection count over 15.9 million. Another 2,104 deaths were announced in the same period, with fatalities reaching a cumulative 184,657 since the beginning of India’s epidemic.

The new figure blew past the previous global one-day high of 297,430 infections, which was tallied in the US in January – though India’s population of more than 1.3 billion far surpasses the US’ 330 million.

The recent surge in India’s coronavirus outbreak is believed to be driven by a new indigenous variant of the pathogen, dubbed B1617, which contains two mutations that appear to make the bug more infectious.

India’s record-breaking Covid figures come as the country works to create its own locally-developed coronavirus vaccine, Covaxin, which was reported to be 78% effective against the illness on Wednesday by the Hyderabad-based Bharat Biotech firm. Granted emergency approval by health authorities earlier this year, millions of Covaxin shots have already been distributed across the country, which aims to churn out 100 million doses per month by September.

Well over 13 million vaccinations have been carried out in India, including doses of Covaxin as well as a jab developed by the British-Swedish company AstraZeneca – manufactured locally as Covishield – and Russia’s Sputnik V inoculation.