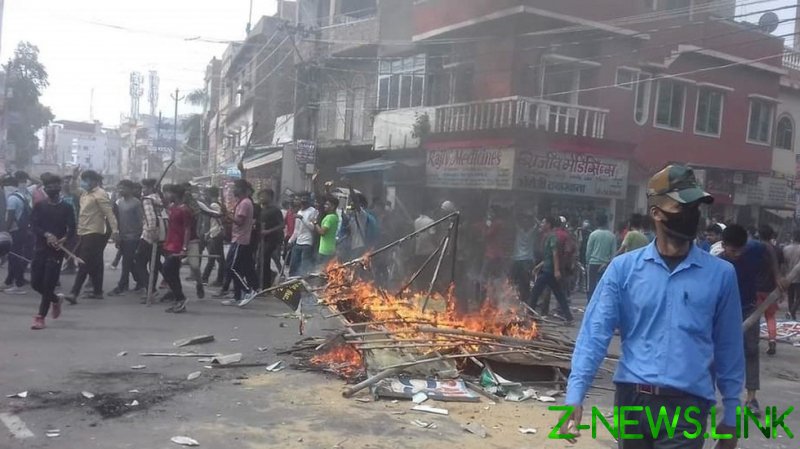 Angry crowds have taken to the streets of India over the past two days to protest the government’s proposed overhaul of the country’s military recruitment system, which critics say could lead to unemployment and compromised security.

As reported by Reuters, protests first flared up in the eastern state of Bihar on Wednesday and have since spread into neighboring states such as Uttar Pradesh and Haryana. Agitated youths have so far reportedly set an office of the country’s ruling party on fire, attacked railway infrastructure, burned down several trains and cars, blocked roads and lit up tires in the streets, according to Indian police officials.

The authorities have been trying to keep the protesters at bay and police have reportedly fired warning shots in the northern state of Haryana after crowds hurled stones at a government official’s house. There is currently no information on potential casualties.

Meanwhile, in Haryana’s Palwal district, local authorities have resorted to shutting off mobile internet access for the next 24 hours in an attempt to prevent the spread of chaos.

The outrage comes after Prime Minister Narendra Modi’s government announced an overhaul of the recruitment process for India’s 1.38 million-strong army, aiming to bring down the average age of military personnel and reduce government expenses.

Under the new system, dubbed ‘Agnipath’(Path of Fire), men and women between the ages of 17-and-a-half and 21 will be eligible to join India’s armed forces only for a four-year tenure, and only one in four recruits will be allowed to come back to serve on a permanent basis.

The old system, however, allowed youths between 16-and-a-half and 21 to enroll in the army for a minimum tenure of 15 years and also awarded them a pension for their service. For this reason, serving in the army was seen as an attractive career path for many youths as it provided a stable salary and public housing.

Agnipath would make those opportunities inaccessible for most Indian youths, who are already faced with a staggering 26% unemployment rate.

“Where will we go after working for only four years?” one protester told Indian news agency ANI. “We will be homeless after four years of service.”

The new system has caused heated debate among the country’s potential recruits, military veterans, opposition leaders, and even members of Modi’s ruling party, and protestors are now calling on the government to roll back the announced reform.

“We demand that the recruitment be done as it used to be done before,” said another demonstrator, adding that, “nobody wants to go to the army for just four years.”

One member of Modi’s BJP party, Varun Gandhi, wrote an open letter to Indian Defense Minister Rajnath Singh on Thursday, warning that, under the new system, 75% of those recruited would become unemployed after their four-year contracts ran out.

“Every year, this number will increase,” he warned in a post on social media.

Other politicians have stressed that the proposed four-year tenure for new recruits would be insufficient to uphold the effectiveness of India’s army. Rahul Gandhi, the leader of the main opposition party, stated in a tweet that, “When India faces threats on two fronts, the uncalled for Agnipath scheme reduces the operational effectiveness of our armed forces,” adding that the ruling party must “stop compromising the dignity, traditions, valor and discipline of our forces.”

The government has defended the proposal, arguing that it will bring a more “youthful profile” to India’s military and bring about a transformational shift towards a more tech-savvy armed forces.

The Agnipath system is intended to introduce a total of 46,000 youths into the regular cadre of the armed forces this year, where they are expected to be imparted with various military skills and experience, discipline, physical fitness, leadership qualities, courage and patriotism.