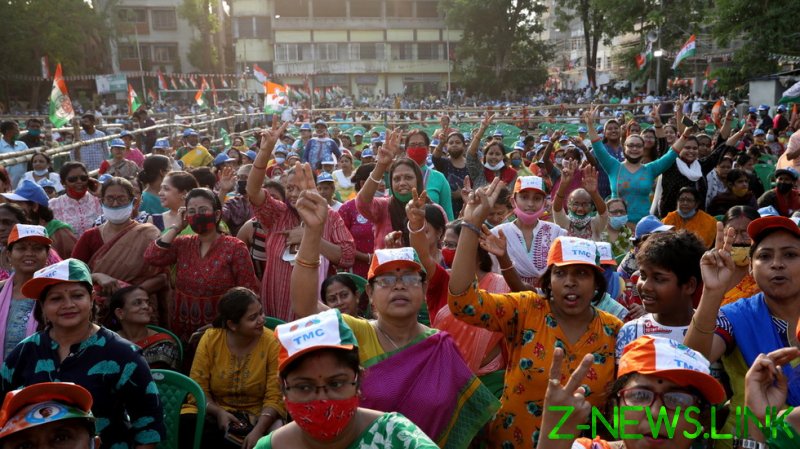 Only two people will be allowed to accompany a winning candidate or their representative to collect a victory certificate on May 2, when the votes will be tallied, the Election Commission of India (ECI) said on Tuesday. Traditional victory processions are now banned.

The results of the regional elections in Kerala, Tamil Nandu, Puducherry, Assam, and West Bengal are expected to be revealed on May 2. More than 8.6 million people went to the polls for the seventh round of voting in West Bengal on Monday, according to the Hindustan Times. The eighth and final round of voting in the state will be held on Thursday.

The measures came after election officials were heavily criticized by the Madras High Court on Monday for allowing public gatherings in the middle of the coronavirus pandemic. Chief Justice Sanjib Banerjee said that the ECI was “singularly responsible” for the second wave of Covid-19.

“Election Commission officers should be booked on murder charges probably,” the judge said, warning that it will stop the vote counting on May 2 if the ECI does not take steps to ensure that public health protocols are followed.

“The situation now is of survival and protection. Everything else comes next,” Banerjee said. “Were you on another planet when the election rallies were [being] held?”

India recorded 323,144 new Covid-19 cases on Tuesday, marking the sixth consecutive day when the daily rise in cases was above 300,000. Overall, nearly 198,000 people died in the country from the coronavirus since the start of the pandemic, according to NDTV.

On Monday, World Health Organization chief Tedros Adhanom Ghebreyesus described the situation in India as “beyond heartbreaking” in terms of the spread of the infection.