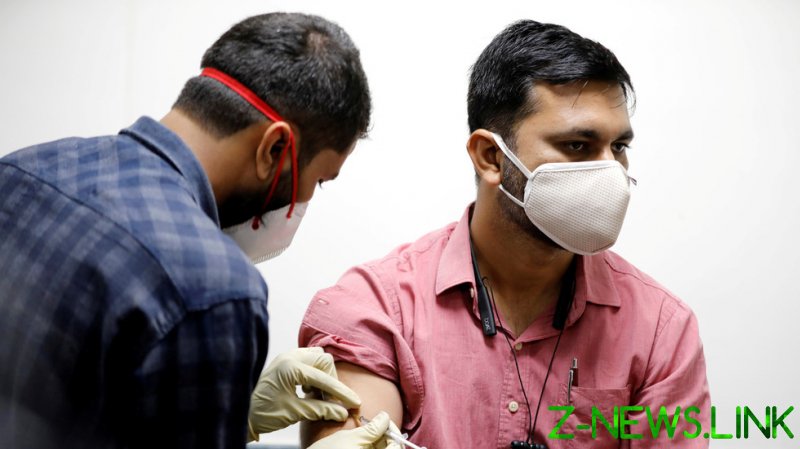 India’s information minister, Prakash Javadekar, announced on Saturday that the coronavirus vaccine, designed by the British-Swedish drugmaker AstraZeneca in collaboration with the University of Oxford, had been approved by regulators a day earlier for emergency use. Formal approval by the Drugs Controller General of India is expected in the coming days.

The news came as India surpassed its 10 millionth case of Covid-19, and inched closer to 150,000 deaths.

The vaccine, which will be made locally by the Serum Institute of India, was approved for use in the UK on Tuesday. However, its rollout has been marred by the confusing data on the vaccine’s efficacy against the coronavirus depending on the dosage used, contained in a peer-reviewed study published in The Lancet medical journal last month.

A majority of candidates in AstraZeneca’s trial received two full doses of the vaccine, and for those the jab was found to be 62-percent effective – a number significantly lower than those rival vaccines showed. However, a smaller subgroup was erroneously given a half dose, followed by a full dose – and among these patients, an efficacy rate of 90 percent was reported. Combined, the vaccine’s effectiveness was rated at 70.4 percent. Just over 2,700 participants were given the lower dose, and nobody in this test group was older than 55.

US regulators balked at the disparity in results, and AstraZeneca CEO Pascal Soriot promised a fresh global trial. Last week he told the Sunday Times that his company has discovered a “winning formula” that, after two doses, “is up there with everybody else.”

However, Soriot revealed no further details about this formula, saying only that AstraZeneca would publish it “at some point.”

Unlike Pfizer’s mRNA vaccine, the first of its kind to ever be authorized, AstraZeneca’s shot is based on a genetically modified cold virus – a version of a chimpanzee adenovirus – making it cheaper to produce and easier to store under normal refrigeration. This makes distribution easier in less developed countries.

The Russian manufacturers of Sputnik V also announced last month that they would partner up with AstraZeneca to research the possibility of using both vaccines in a single immunization regimen. Its makers say they are currently working on trials to push the AstraZeneca vaccine’s efficacy above 90 percent.