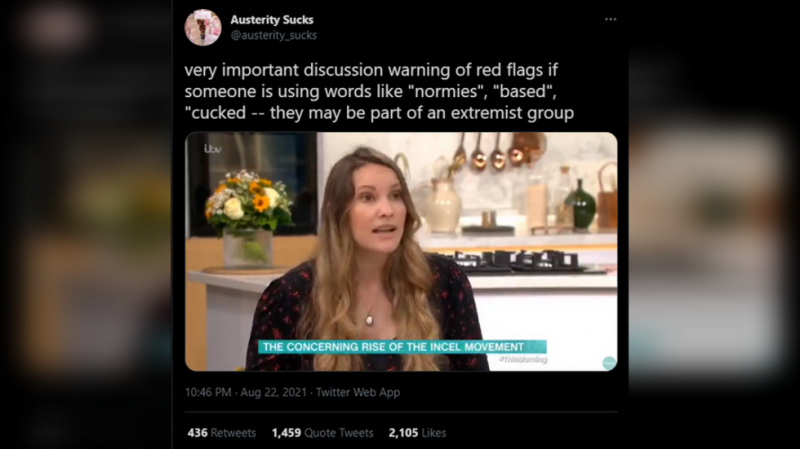 A clip of journalist Laura Bates sharing her expertise about “incels” has caused much soul-searching and repentance on Twitter. Founder of the “Everyday Sexism Project,” Bates is one of many impartial experts on the so-called incel (involuntary celibate) movement – typically described as a resentful den of internet-addicted virgins.

Bates was invited by ITV to share her deep insights on the subject following the deadly shooting in the English city of Plymouth earlier this month. The suspect, a 22-year-old male, had allegedly posted on ‘incel’ forums, raising concern that there could be murderous incel sleeper cells across the UK. What can parents do to ensure that their sons do not become radicalized and turn into killers? ITV asked Bates.

The author of ‘Men Who Hate Women’ pointed to numerous “red flags” that could indicate to worried parents that their offspring are secret incels.

“Referring to people as ‘normies’, or as ‘triggered normies’, is the word incels use to refer to people outside their community,” she expertly explained, adding that anyone who uses words such as “triggered, based [or] cucked” are also potential dangers to the public. People who refer to themselves as “red-pilled” or “black-pilled” are similarly suspect.

What’s important to understand is that these words serve as a “conduit to other forms of extremism,” Bates revealed. “It isn’t completely separate from far-right, white nationalist, white supremacist movements… The incel community is a very racist community.”

For many internet users, it was a deeply humbling ITV segment.

Others refused to give up their white nationalist lingo.

Still others were concerned about Bates’ ability to continue going undercover on the internet, with several observers suggesting that she sounded like an out-of-touch geriatric.

The panic over incels comes at a time when both the US and UK have begun to sound the alarm over the alleged threat posed by domestic extremists. Critics have accused authorities of using the narrative in an attempt to criminalize politically incorrect views. British law enforcement has come under fire for patrolling the streets in rainbow-themed patrol cars as they hunt for “hate crimes.”