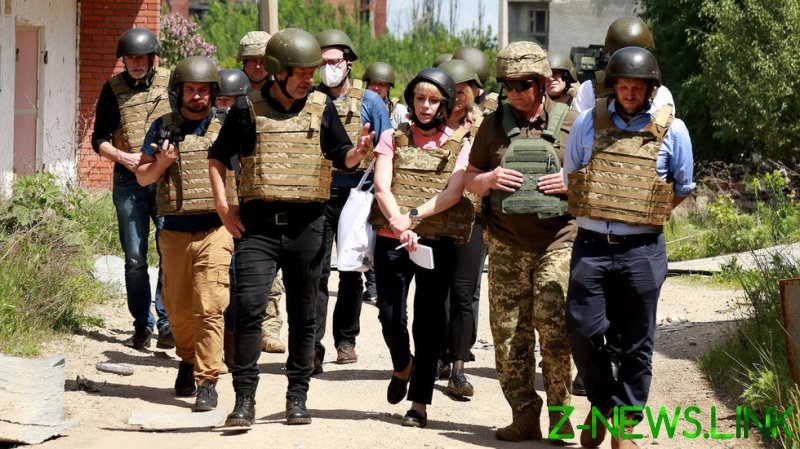 “For a German party leader to be photographed donning a steel helmet near the Russian border is inappropriate, in view of our history, and downright grotesque for a Green party leader,” Dietmar Bartsch told Dusseldorf newspaper the Rheinische Post.

Last month, amid ever-growing tensions in the Donbass, Robert Habeck went to inspect the front line at the invitation of Ukrainian President Volodymyr Zelensky. As well as posing for a photo in protective gear, Habeck also revealed his belief that Germany should help out Kiev by supplying it with arms.

The conflict in Donbass started in April 2014, when two pro-Moscow breakaway republics unilaterally declared independence from Kiev. These regions – the so-called Donetsk (DNR) and Lugansk People’s Republics (LNR) – are unrecognized by both Russia and Ukraine. However, according to Kiev, they are under the control of the Kremlin, a charge Moscow denies.

While the photo caused some backlash, Habeck’s proposal to arm the Ukrainian Army caused serious controversy in Germany, not least within his own party. The Green Party was founded with a pacifist ideal, and any provision of weapons seems to go against this principle. Other politicians, such as Rolf Mutzenich of the center-left SPD, called the demand “frivolous,” noting that it “once again underscores how incapable of governing and disingenuous the Greens are currently appearing.”

Senior officials in other major parties, such as the center-right ruling CDU, also slammed Habeck.

“I am convinced that the conflict can only be solved by political channels, and that should be clear to all involved,” he said. “This remains the guiding principle of our engagement, and it won’t change – weapons deliveries don’t help in this.”

The idea has gone down well in Kiev, however. In an interview with Frankfurt-based newspaper Frankfurter Allgemeine Zeitung on Tuesday, Ukrainian President Volodymyr Zelensky complimented Berlin on its work to solve the conflict but suggested that Germany can do more to help – in particular, noting Habeck’s comments.

Following the backlash, Habeck later rowed back on his comments, noting that he simply meant “defensive weapons.”

“Night vision devices, reconnaissance devices, explosive ordnance disposal, and medivacs should be made available,” he said.

While advocating for the supply of weapons seems out of character for a Green Party, the German branch has long supported Kiev against Moscow. In particular, the Greens strongly oppose Nord Stream 2, a controversial gas pipeline that will connect Russia to Germany via the Baltic Sea. It aims to protect Berlin’s energy security and make the process less reliant on third countries transiting gas, thereby lowering the price. As things stand, much of Europe’s gas comes from Russia via Ukraine, and Kiev receives hefty fees for pipeline usage.