Home / Video news / In Zhytomyr said goodbye to those killed in the ATO area sniper. Video

In Zhytomyr said goodbye to those killed in the ATO area sniper. Video 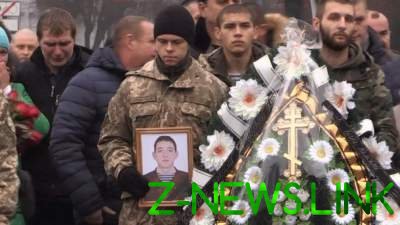 The hero was buried in his birthday at the military cemetery in Zhitomir.

In Zhytomyr said goodbye to Atoshnik Maxim Perepelitsa. He had three days did not live up to 27 years.

Guy served as a sniper in the 95th air assault brigade. In the area of ATO was at war with 2014. The bullet struck him near one of the strongholds of the village Verkhnetoretskoye, in the Donetsk region. Maxim died on the way to the hospital.

“Killed by a sniper. Had before him a wounded man, he rushed to help and also caught a bullet. The boy was intelligent, very versed in the sniper case, very aptly shot, was an example to many. Do not want to lose these men, these comrades,” said the Deputy commander of the airborne assault battalion Eugene Gonchar.

The hero was buried in his birthday at the military cemetery in Zhitomir. He is survived by parents and sister.