Home / Video news / In Zaporozhye on the station broadcast clips of the Railways. Video

In Zaporozhye on the station broadcast clips of the Railways. Video 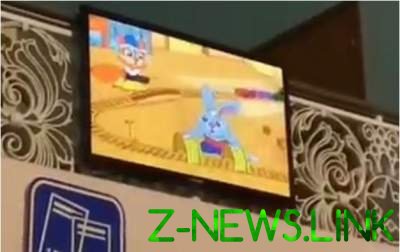 Immediately after the rollers of the Railways show a video about the war in the Donbass.

On the television panel at the railway station Zaporozhye-1 twist videos are made for Russian Railways. On Tuesday, November 28, on his page on the social network Facebook said Alexei Dobryakov.

According to him, there are three signs that indicate that at the station show videos that is the Railways.

“Twist of different movies, two animated of which today I fixed, it’s stolen videos RZD (Russian Railways), social sphere, showing how not to behave on the railroad. How did I know? Very simple. First, these videos are in Russian, secondly, train in the cartoons painted in red brand book of Railways, the third, the hare in the video, the owner with the instructions of the Russian Railways,” wrote Dobryakov.

“Kontsovki these cartoons they are clearly cut, because there all the screen in red would be the Railways. And after these two cartoons some social programs about the ATO runs. So on a subconscious level, not forgotten, in what country you live, or not live…” he added.