In which countries first begin to celebrate the New year 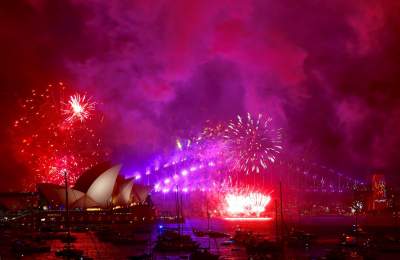 However, the first to celebrate the New year begin in the dwarf Kingdom of Tonga in the Pacific ocean. And complete – in Haiti and Samoa after 25 hours.

+0.15 – Chatham Island (New Zealand), distant from the main Islands of New Zealand, is in a special time zone and is the second place come the New year.

+1.00 – the New year is welcomed by New Zealand (Wellington, Auckland etc.) and explorers from the South pole in Antarctica.

+2.00 – New year begins the residents of the far East of Russia (Anadyr, Kamchatka), Fiji and some other Pacific Islands (Nauru, Tuvalu, etc.)

Australia. Sydney host a Grand celebration. New year’s eve the whole city is like wonderfully decorated tree, whose branches bend under the weight of all the ornaments. The sky over Sydney sparkles with numerous salutes and fireworks.

In Japan New year is celebrated on January 1. It is mandatory to pursue the Old custom of the year, including the organization of receptions and visits to restaurants. At the beginning of the new year, the Japanese begin to laugh. They believe that laughter will bring them luck in the incoming year.

+6.00 – China, parts of Southeast Asia and the rest of Australia.

Chinese New year is celebrated between January 17 and February 19, during the new moon.

In India New year is celebrated in different ways. In one part of the holiday is considered open when be struck by a flaming arrow kite.

+10.00 – Armenia, Azerbaijan, part of Russia (Samara), some Islands in the Indian ocean.

In Greece New year is the day of St. Basil. Saint Basil was known for his kindness, and Greek children leave their shoes by the fireplace in hopes that Saint Basil will fill the shoes with gifts.

Italy. Once a New year has begun, the Italians are in a hurry to get rid of things that have already “served its purpose”. In Italy, the custom to bring the first morning of the new year clean water from the source, as it is believed that water brings happiness.

France. Before Christmas the French hung over the door houses a branch of mistletoe, believing it will bring good luck next year. In addition, the French decorate the whole house with flowers, be sure to put them on the table. In each house, try to place the layout, depicting the scene of Christ’s birth. According to tradition, a good master-winemaker new year’s eve must clink glasses with a barrel of wine to congratulate her on her feast and drink for the next harvest.

UK. About New year in England broadcasts the tolling of a bell. The English have a tradition of letting the old year out of the house, ringing the bell you open the back doors of the houses, and then open the front to let in the new year. Christmas gifts in the family circle of the British heard of the old tradition – by a lot.

+17.00 – Argentina and of the Eastern part of South America.

+18.00 – Eastern Canada, many Caribbean Islands, and part of South America.

+20.00 – Central Canada and the United States (Chicago, Houston), Mexico and most of Latin America.

+25.00 – residents of the state of Samoa celebrate the New year the latest.

Meanwhile, there are countries that do not celebrate New year on 1 January.

So, Saudi Arabia does not celebrate the New year in principle. The fact that the celebration of the change of dates is considered to be alien to Islam, in principle. For the faithful in Saudi Arabia there are only three holidays: independence Day, celebrating the end of Ramadan and feast of sacrifice.

In Israel, January 1 is a work day if it is certainly not the Sabbath – a Holy day for the Jews. Celebrate your New year the Israelites in the autumn – the new moon of the month of Tishrei on the Jewish calendar (September or October). It called the holiday of Rosh Hashanah. It is celebrated for 2 days.

1 January – ordinary day in Iran. The country lives according to the Persian calendar. The new year is celebrated in Iran on the day of the vernal equinox – March 21. The holiday is called Nowruz, i.e. new day.

In India as a multicultural holidays that if would all celebrate it would be no time to work. So some of them became “holidays”. These days all companies and offices are open, but employees can take time off. It these holidays include 1 January. March 22 comes the New year on a single national calendar of India. In Kerala the New year is celebrated on April 13. He is known as Vishu. The Sikhs on the same day, celebrating their New year or Baisakhi. In South India, the fall is widely celebrate Divali, which means the arrival of the new year. This is not a complete list of new year’s days that you celebrate in India. By the way, among the “feast of choice” is the Catholic Christmas.

In South Korea, 1 January – closed. There are common decorated Christmas trees and Santa Claus, but the beginning of the year in Korea is perceived rather not as a holiday, and as an additional output, which can be enjoyed in a pleasant circle of family and friends. But if something is being celebrated on an unprecedented scale, so it is Seollal – lunar New year calendar. To this day most Koreans go to their hometowns to honor ancestors.