Home / business / In Ukraine there is a unique “scout invisible”

In Ukraine there is a unique “scout invisible” 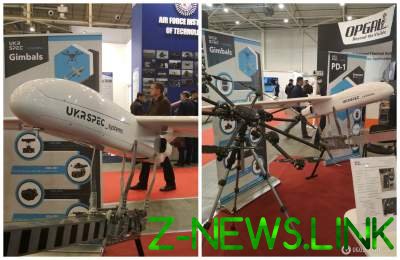 The new drone was presented at the exhibition in Kiev.

Ukraine has developed an unmanned aerial vehicle, which is substantially fixed radars An example of such technology was presented at the international specialized exhibition “Arms and security” held in Kyiv.

“Drone PD-1 was originally developed for use in the ATO zone. We started with the fact that three years ago bought a Chinese fuselage and built upon it their platform. Three years later, we are already assembling the fuselage themselves in Kiev. It consists of composite materials for low noise and low radar visibility,” – said the representative of the company Ukrspecsystems.

According to him, the drone is designed for missions in a combat zone, and exploration.

The expert also listed the main specifications of the device: “Flying 15 hours approved by the altitude at this point – 3 km range – up to 85 kilometers, live video stream – up to 50 kilometers, the speed is 120 km/hour, the total length of the mission can be more than a thousand kilometers.”

“To radar he’s practically invisible because it is composed entirely of composite materials. The only notable element is the engine. Everything else, including the suspension, made of fiberglass and carbon fiber that are visible to the radar at a very low level. Eyes at a height of 3 kilometers to consider it practically impossible. The exhibit is in white color for the stand, for exhibition, but when he is in grey color, even if it rises to a height of one kilometer, it is almost not visible,” – said the expert.

We will remind, the exhibition “Arms and security” held in International exhibition center in Kiev on Brovarsky Avenue, 15, and is open to visitors October 11-12, from 10 to 18 hours, 13 October from 10 to 16 hours. The entrance fee – 40 UAH.

The exhibition also presents self-propelled howitzer Krab production of Poland, about which he wrote the “observer”, the Ukrainian machine gun KT-7.62 mm, surpassing the characteristics of the Kalashnikov machine gun, the first mobile protivomoroznyh complex, is able to effectively neutralize attacks a group of commercial unmanned aerial vehicles, as well as upgraded anti-aircraft self-propelled ZSU-23-4M, which is equipped with missiles.