In Ukraine officially banned “the Matchmakers” 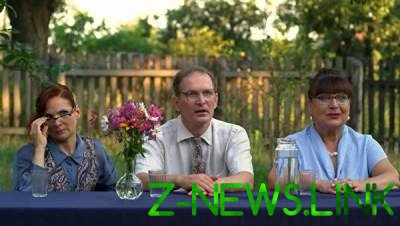 Why have banned the popular TV series.

“Matchmakers” – a Comedy series created by Ukrainian Studio Kvartal 95. In 2008 it was filmed for six seasons. Its authors have released a Christmas musical and a cartoon “Swatika”. Next year’s planned release of “the Matchmakers-7”, the shooting of which began last summer. Premiere took place on TV channels “inter”, ICTV, 1+1, and also “Belarus 1” and “Russia 1”.

Plot. The basis – the everyday life of a large family – spouses Masha and Maxim Kovalev and their parents. In the first season of grandparents coming to watch my granddaughter Zhenya (daughter Kovalev – ed.) while her mother and father rest in Italy. As a result, between pairs and then break out a quarrel. Their main cause – the differing views of intellectuals Kovalev and peasants Budko. But, the two men still closer together in the process of finding a way out of ridiculous situations in which they find themselves. Subsequent seasons also tell about the life of the family and their environment. In General, the scenario is built on common stereotypes about relatives and their domestic conflicts.

The cast. Russian actor Fyodor Dobronravov performed one of the main roles – Ivan Bud’ko, father of Masha Kovaleva. His on-screen wife was a Russian actress Tatyana Kravchenko. Their matchmakers played Anatoly Vasiliev and Ludmila Artemieva. The role of Masha Kovaleva played Inna the Queen, and her husband Maxim – Denis Rodnyansky in the first season, and Daniel White in the future. Matured Eugene played Anna Kosmal.

See also:  Ukrainians may be required to throw garbage only in the bins

The reason for the ban. The security service of Ukraine has banned Fedor Dobronravov entry to Ukraine for three years. This is due to the fact that Russian actor repeatedly allowed himself to public anti-Ukrainian statements and supported the annexation of Crimea, which he often visited after the occupation. Behind SBU in the blacklist the actor has made the Ministry of culture. Thus he became the 114th in the list of persons who threaten the national security of the state.

In connection with its entering in the list the State Agency of Ukraine for the movie was canceled registration of all seasons of the series “Matchmakers”, where Dobronravov played a major role.