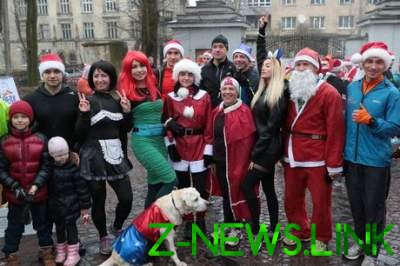 On the eve of New year in different cities of Ukraine held festive races in costume of Santa Claus.

In Lviv, the event was held in the Striysky Park.

It was organized by activists that promote daily run. The race was attended by about 80 people of different ages. The oldest “Santa” 78 years, the youngest was 5 years. One of the participants of the race became a nun. Some runners for the event, chose the costumes of various cartoon characters, and also took the dogs with me who were also in costume.

All the participants overcame the distance of approximately five kilometers. A similar event was held in the town of White Church.