Home / WORLD / In Turkey overturned bus with tourists, has died

In Turkey overturned bus with tourists, has died 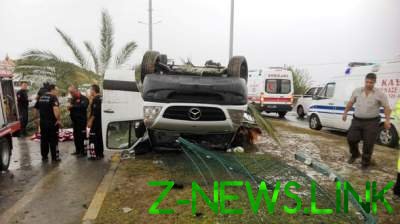 On the bus, according to preliminary data, there were tourists from Germany

The bus, which, according to preliminary data, there were tourists from Germany, overturned near the Manavgat town.
According to the Turkish newspaper Hurriyet, among the victims in the accident – a small child, and one of the injured is in serious condition.

According to preliminary data, the driver of the van lost control on the wet road.
On a scene there has arrived police, firefighters and paramedics. According to the publication, the wounded were got out of the wrecked van with the help of special tools. The driver of the vehicle was taken to the police station.