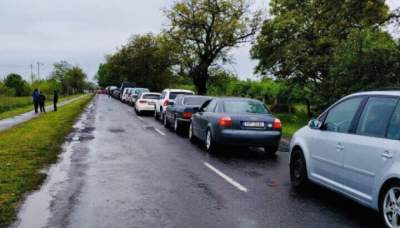 The Ukrainians returned to work after the holidays.

At border checkpoint “Uzhgorod”, “Tisa” and “Maly Berezny” in the Transcarpathian region formed a queue of several hundred cars on the exit from Ukraine. The guards increased the number of outfits and equipped with additional jobs.

As reported in Topscom the frontier, the border guards take all measures for acceleration of control operations: increased the number of border duties, equipped with additional jobs and held working meetings with the Hungarian and Slovak colleagues.

As reported by Elena Trachuk, press Secretary of chop border detachment, according to information provided by the Hungarian party, tonight at eight o’clock in the morning again out of order, the database of the Border police of Hungary the entire section of the Ukrainian-Hungarian border.

“According to available information, now the Hungarians and restoration work,” she said.

“Therefore, in particular, increase the queue and at the Slovakian border, the crossing points which are close by. However, the problems on the Slovak border related to the fact that after the holidays many Ukrainians go to work in the EU”, – said Trachuk.

Given the situation, Topscom border unit, please take into account the circumstances, when planning travel abroad and to choose other border crossing points for border crossing.