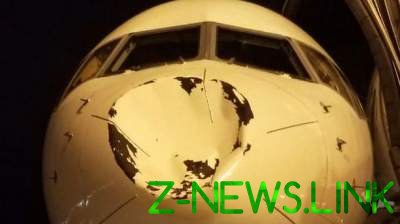 It is possible that he hit a bird during landing.

The plane with players of NBA club “Oklahoma city” after a flight to Chicago landed with an impressive dent on the nose.

The representative of the airline, a Charter flight which flew the team said that the damage most likely occurred because of a collision with a bird while reducing.

See also:  In Texas, during a thunderstorm, noticed a few UFOs. Video

“All safe. But what could hit us in the sky at this hour of the night?” – asked the player, “Oklahoma city” Carmelo Anthony posting a photo of the dent on his page in Instagram.

Recall that in November last year crashed a plane Lamia BAE-146 with the players of the Brazilian club “Epicoene” on Board that crashed in Colombia.

On Board were 81 people, six managed to survive. Goalkeeper Marcos Danilo died in the hospital, where he was taken after the accident.