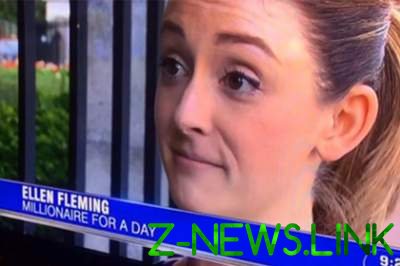 The error was quickly corrected.

A resident of the American city of Boston, Massachusetts, by mistake got a million dollars and ten minutes later lost it.

Wednesday, July 18, 26-year-old Ellen Fleming (Ellen Fleming) has received a voice message from an employee of the company TD Ameritrade, where she was account. He notified her on making money. It included a mobile app, checked the score and was surprised to find it more than a million dollars.

Fleming admitted the Boston Globe that she wanted to keep the money secret. With them she could quit work and pay off debts for my studies at the University “we Need to use every chance you get. But this chance, it seems, could lead me to Federal prison. It wasn’t worth it”, she said.

The woman talked about a million fallen on her mother, and then called Ameritrade and was told about the error. She explained that the money was intended for another client of the company with the same name and surname that lives in Florida.

See also:  The reaction of the presenter on the dog "blew up" the Network

Ten minutes later the mistake was corrected, and an account has only $ 63. Fleming took it with humor. “Please take care of that in his obituary they called me ‘Ellen Fleming once visited a millionaire'” she joked on Twitter.