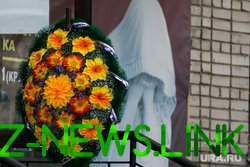 Video with a story about the machinations of the doctor issued a public Mash. Basil Suprunova in 2018 was diagnosed with cancer of the esophagus. The son of Ural Vitaliy Suprunov says Kovalevsky, double-took them 50 thousand rubles for the prosthesis of the esophagus. After the first operation of the x-ray showed that the prosthesis is not. “He said endoprosthesis father came out through the intestines. I say — well, it can’t be. Where could he go? Down to the stomach, but no further”, — said Vitaliy Suprunov.

Later it turned out that the prosthesis were included in the list of free services — the hospital has received money from relatives, and from the insurance company. In late April, Vasily Suprunov died.

At the time of publication contact Aleksey Kovalevsky failed in the waiting room of the radiology Department of the hospital №14, Ekaterinburg said that he was not there, and advised to call on Monday. Press Secretary of the regional Ministry of health Konstantin Shestakov calls on cell phone is not answered.