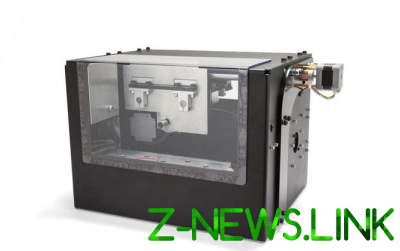 US citizens have the right to manufacture firearms, but can’t transmit it to others.

Strictly speaking, 2 Ghost Gunner is a miniature milling machine, because it allows to produce weapons from special billet aluminum.

It was created by lawyer and inventor Cody Wilson, who previously created on a 3D printer the world’s first working prototype plastic single-shot pistol, The Liberator. A new device Cody Wilson, says Wired, is designed “to challenge the very essence of gun control”.

“The machine is humiliating the power that wants to humiliate us,” said Wilson, who advocates for the right of Americans to produce, store, carry and use firearms.

According to the developers, Ghost Gunner 2 can be used for the production of lower receivers for rifles AR-15 and AR-308 as well as part of M1911 pistols. If you have electronic drawings owner 2 Ghost Gunner can manufacture most of the parts of the weapon, with the exception of the springs and stems.

The Ghost Gunner machine 2 is estimated at $1675, and billet for about $100 each. Drawings of weapons in the format .dd made available.

It is noted that US citizens have the right to manufacture firearms, but can’t transmit it to others. In the sale there are almost all the components of the pistols, in addition to framework which given a serial number and need to register.