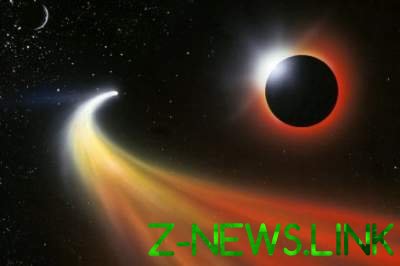 In our Solar system may periodically receive a “visitors” from the far depths of space. In favor of this statement says the discovery by astronomers of an unusual comet that is now quite far from Earth. Features of the trajectory of its movement indicate that this comet, with a very high probability may be the first discovered the comet that came to us from the depths of interstellar space.

Scientists-astronomers viewing the sky through one of the telescopes in Hawaii, have discovered a rapidly moving object that passes the point of closest approach to the Sun on 18 October this year. Over the next week, astronomers watched this object, called C/U1 2017, another 34 times. The collected data showed that the object C/2017 U1 moves along a strange trajectory, at an unusual angle to the plane of the system. In addition, the object passes by the Sun, not making a turn around him.

The most famous astronomers of comets revolve around the Sun in closed elliptical orbits, the far end of which is located in the heart of the distant Oort cloud. In contrast, the comet C/U1 2017, passing the Sun, more will not return to the Solar system. Analysis of the trajectory of this comet suggests that it came from the constellation Lyra, has passed through the Solar system, changing its trajectory, and go back to eternal wandering the depths of interstellar space.

See also:  The singer of the Hardkiss for the first time showed the son 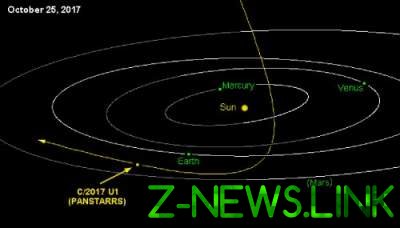 “This comet has come so far that we cannot even begin to say where she was born. Likely this comet came from outside our system,” says Simon porter (Porter Simon), an astronomer at the southwest research Institute, “But quite likely possibility that the comet C/2017 U1 is the usual comet from the Oort cloud, the trajectory of which was influenced by the gravity of Jupiter or another planet.”

And to dot the “i”, astronomers need to perform additional surveillance. The new data will allow to determine whether the comet C/U1 2017 “alien”? And, fortunately for astronomers, the comet will remain visible in fairly powerful telescopes for another couple of weeks.