In the sky above the Lipetsk noticed a bright object 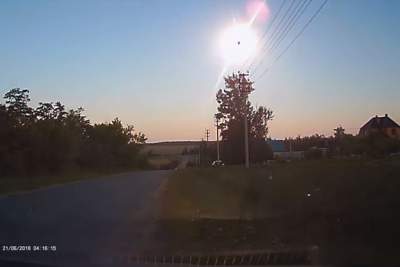 The burning object was extinguished before reached the ground.

June 21 residents of five regions of Central Russia saw in the sky a bright object, which flared up and then burned up in the atmosphere.

Astronomers think it was superbolid of natural origin.

At 4:20 Moscow time on the Voronezh, Lipetsk, Tula, Kursk and Orel regions was seen a bright object. His flight was accompanied by the emergence of flash, similar to the one observed in the fall of the Chelyabinsk meteorite. The duration of the bright phase was about 4 seconds.

Accurate information about the fall of the object at the moment. The burning object was extinguished before reached the earth — so now we can’t tell, did the Russians meteorite (that is, the body that fell on the surface) or a fireball (or a celestial body, burned in the atmosphere).

A celestial body, say the astronomers, is likely to have a natural origin.

“With a probability of 90 percent, it can be argued that this is a common natural meteoroid with a diameter of about 1-3 meters. Why it is not space debris? The fact that the usual space debris — a satellite launched into orbit around the Earth, so they are quite hollow and revolve slowly enter the atmosphere. Due to this, their flight path in the atmosphere fairly long — falling space debris lasts about 10-20 seconds and even 30 seconds. Here we see a quick sharp entrance with a duration of about three, maximum of five seconds. Accordingly, the angular velocity is clearly greater than 8 kilometers per second, the maximum speed of spacecraft in Earth orbit, the space debris we can immediately exclude”, — says Stanislav Short, the Russian astronomer, head of the scientific work of the Astronomical station TAU.

“Natural origin also indicates the remaining smoky track, which is very similar to trail of the Chelyabinsk meteorite. Rather, it is a stone body. At the moment we can call him superbolid, because it is very bright — his brilliance is in the order of -25 magnitude, almost like the Sun” — said the astronomer.

“There is a high probability that the wreckage floated to the Ground. You can see the flash, it is the time of the collapse of the main body. I estimate that the largest fragments should be in diameter no more than 10-15 centimeters,” explains Stanislav Short.