Home / Video news / In “the simpsons” showed a parody of Pussy Riot. Video

In “the simpsons” showed a parody of Pussy Riot. Video 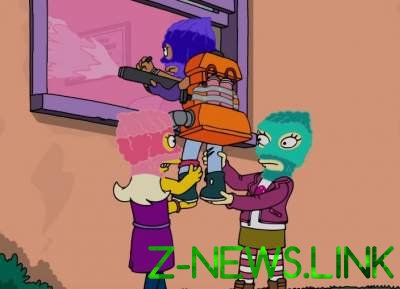 One of the members of the group appreciated the parody.

Characters of the next series of “the Simpsons” were Schoolgirls in Balaclava, which inspired the shares of the punk band Pussy Riot.

The relevant portion of the episode titled “Bart vs. Itchy & Scratchy” (Bart vs Itchy and Scratchy) was published on the Youtube channel “Animation on Fox”.

See also:  The effects of the bite of a poisonous fish. Video

The creation of three Schoolgirls, participating in group Bossy Riot, joined by Bart Simpson. They make a variety of provocative actions in the city.

In particular, they are taken to the office of school Director Skinner, nabryzgivajut Cabinet with pink paint and writing on the wall the phrase: “Sandals forever.” Then the Director comes into the office and said, “I don’t negotiate with terrorists, I just give up.” Then he takes the microphone and announces that the ban on sandals at school lifted.

The participant of Pussy Riot Peter Verzilov in his “tweet” called the parody “a megabomb and supermetal”.