Home / WORLD / In the shadow of The Eagle: UFC matchmaker Khabib has got Conor McGregor & lightweight rivals dancing to his tune 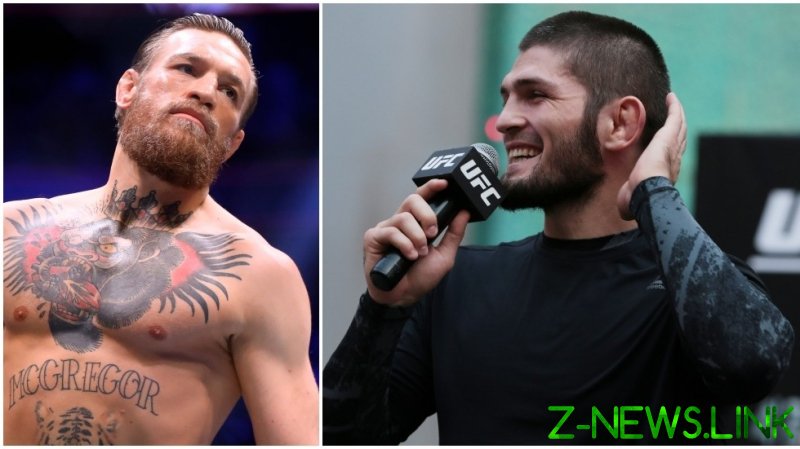 After cranking up the anticipation and making fans wait a little longer than expected on Saturday night, UFC president Dana White finally revealed the outcome of the discussions he had held one day earlier with Khabib.

Would the retired Russian return for one last fight and a shot at the 30-0 mark, or was the 155lbs champ truly done with his remarkable, unblemished career?

Well, the answer was that we still don’t know.

For now, the lightweight title remains in the hands of the 32-year-old Russian.

According to White, Khabib is willing to return to the UFC octagon to defend it – but with the caveat that it must be against someone he deems deserving.

“Show me something spectacular” is supposedly the challenge Khabib has laid out to his lightweight rivals if they really want to lure him back.

White said the Dagestani had been impressed by Charles Oliveira’s dominant decision victory over Tony Ferguson in December, and that he would be closely following events at UFC 257 on Fight Island on January 23.

That card features a certain Irishman topping the bill for his rematch with Dustin Poirier, while new UFC arrival Michael Chandler meets Kiwi slugger Dan Hooker in the co-main event.

It is perhaps no coincidence that the hype surrounding next weekend’s event in Abu Dhabi has now been ramped up a notch with the prospect of impressive performances setting up a Khabib showdown. After all, Dana White is rarely one to miss a marketing trick.

With Saturday’s news, Khabib has effectively assumed the position of matchmaker for his UFC return. The message is clear: if he’s not interested in what’s on offer, there’s no competitive incentive for him to dust off his gloves.

Imagine for a moment how that feels from the perspective of those on the other side of the equation. The gauntlet has been thrown down to the likes of Oliveira, Chandler and Hooker, as well as former Khabib victims McGregor, Poirier and Gaethje.

Some have already responded. Brazilian sensation Oliveira respectfully tweeted that he was ready. Former featherweight king Max Holloway even threw his hat into the ring again following his victory against Calvin Kattar on Saturday night, in what was one of the UFC’s all-time great striking masterclasses.

Dana White, however, has made little secret of the man he wants Khabib to come out of retirement for. Conor McGregor is still a blockbuster draw, and a rematch with Khabib would – by some distance – be the biggest fight the promotion could make.

While straining to retain impartiality, White will likely be sitting with everything crossed at the Etihad Arena next weekend, hoping that McGregor is the man to provide the fireworks that spark Khabib’s interest.

McGregor has promised as much, saying he will create a “masterpiece” against Poirier – a man he destroyed inside one round when the first the pair met back in 2014.

After an aborted comeback ‘season’ in 2020, McGregor looks fully focused again, purportedly an upgraded version of The Notorious.

For the Irishman, though, White’s words on Saturday must have stung at least a little. He has to dance to Khabib’s tune as he heads into his contest with Poirier. McGregor is now effectively on show in Abu Dhabi not just to the fans, but also his Dagestani rival. It’s an opportunity, but it’s also a clear signal where the power lies.

The Khabib rematch is an itch that McGregor is desperate to scratch. It has been in his thoughts leading up to the Poirier fight, as evidenced by his social media spats with Ali Abdelaziz, Khabib’s manager, and comments about the supposedly “scared” Russian fighter “scurrying” from the UFC.

Convinced that he was distracted and far from his peak in their Las Vegas grudge match at UFC 229 in October 2018, the Dubliner wants a second crack at Khabib.

The only other time McGregor has lost in the UFC octagon – against Nate Diaz – he rectified that within the space of five months. This time the wounds of defeat have festered for far longer.

Khabib could walk off into the sunset, safe in the knowledge that he settled his most acerbic rivalry. McGregor, at present, does not have that luxury. 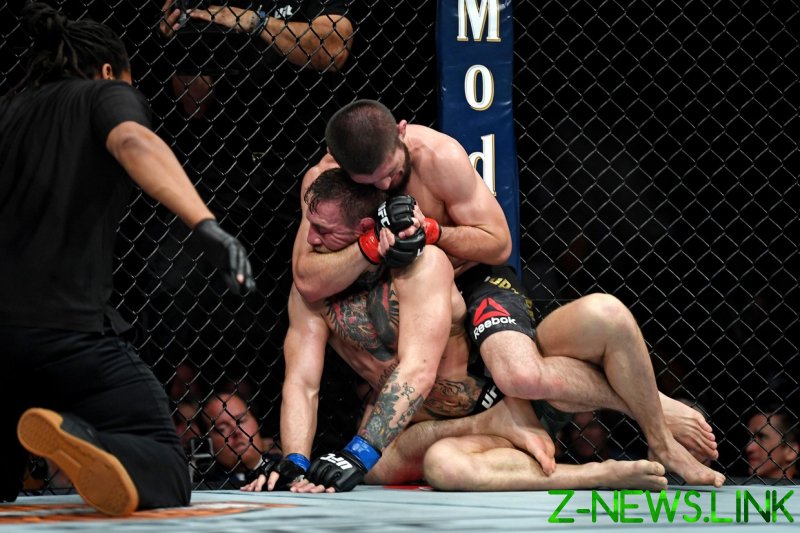 Khabib choked out Conor McGregor in the fourth round in Las Vegas. © USA Today Sports

Cast your mind back to that fractious night in Las Vegas more than two years ago, and things were very different. Khabib was the lightweight champion, but in many respects it was seen as the return of the king as former two-weight title holder McGregor stepped back into the octagon after his money-spinning foray into boxing.

Ever since that loss, McGregor has sought the chance to level the score with his Russian tormentor. His plan – partly outlined in Moscow toward the end of 2019 – was for his 2020 season to culminate in a rematch with the Russian. That was scrapped as Covid took hold.

As he is often so wont to tell us, McGregor’s business stock may never have been higher. But in fighting terms, he has catching up to do if he wants to reach the rarified heights he once occupied.

Khabib, for his part, has consistently dismissed the idea of running things back. Been there, done that, got the T-shirt. That is essentially the line Khabib has trotted out with disdain when approached with the idea of a rematch with McGregor. Since Las Vegas, he’s the one who’s held all the cards in the rivalry.

It’s hard to say whether a McGregor masterclass next weekend would even change that, or if there is enough water under the bridge after the insults and fractiousness of the pair’s first fight. Khabib has admitted money would be a factor, but the kind of sums would have to be truly eye-watering (and record-breaking) for a man who is already more than comfortable in financial terms.

Whether he likes it or not, McGregor now needs to impress a man he has so often ridiculed if he ever wants to share the cage with him again. It’s not a position the Irishman has become accustomed to.

The shadow of The Eagle looms large over UFC 257 next weekend.