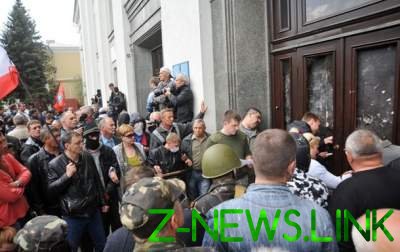 In separatist activities and in the capture of the regional administration was seen 3.5 thousand students of universities of Lugansk.

In the capture of the Lugansk regional state administration in March 2014 was attended by about 3.5 thousand Russians – the students of Lugansk universities. This was during the interrogation in the Starobelsk district court in Luhansk region on Wednesday, 15 November, said former Deputy chief of regional management of security Service of Ukraine Andrey Gyroid.

Ex-Deputy head of the SBU reported the circumstances of the organization of the Russian special services of the separatist rallies in Luhansk region in March-April 2014.

“Russian intelligence agencies for many years have created a network of agents in the Luhansk region”, – he said.

In particular, the Russian intelligence services operated under the guise of veteran organizations and clubs of historical reconstruction.

In addition, he noted that secessionist activities in the seizure of regional administration was attended by students of universities of Lugansk – the citizens of Russia.

“About 3.5 thousand students from Russia in Lugansk, who studied on a paid basis, took part in those events,” – said Girod.

He also said that the seizure of the Luhansk regional administration occurred in connection with the fact that the police has not received commands to counter the separatists.