Home / Video news / In the river there was a double accident, the perpetrator fled. Video

In the river there was a double accident, the perpetrator fled. Video 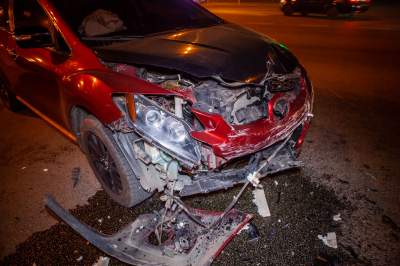 In the river, a drunk driver crashed into two cars and tried to escape from the patrol

On April 6 Avenue Slobozhansky there was a double accident, the perpetrator of which disappeared. While doctors assisted the injured girl, the patrol managed to detain the drunk driver.

The incident occurred around midnight.

It is known that the accident occurred at the intersection of prospect street slobozhanske and Kalinovo. Kia, who was standing at a stoplight “caught up” gray car, and then tried to escape. At this point, the car crashed into a Mazda that was traveling in the direction of the right Bank. Not understanding the incident, the driver of a foreign car has disappeared in an unknown direction.

See also:  The player passed all the field on my knees, fulfilling my promise. Video

“The driver hit us and tried to escape. Ran a red and crashed into a Mazda that was traveling on the green” – said the passenger of the Kia.

Kia is almost not affected, while Mazda is heavily damaged. The girl, who was driving a Mazda needed the help of doctors and the scene of the accident her hospitalizovani in city clinical hospital №6.

Meanwhile, the patrol began to search the car, speeding away from the scene of the accident. This patrol car was able to notice in the streets of Sofia Kovalevskaya: the car was gray, as described by the participants in the accident, and on the right side of the car had traces of a recent accident.

The driver of a gray Toyota was trying to hide, “yards”, and he saw the patrol left the car and decided to flee. Police managed to catch up and detain him. It turned out the man was driving a Toyota in a condition of strong alcoholic intoxication.

Note that the fact that he tried to escape, fiction: the car had a punctured right front wheel and moved it practically on the disk.

Several the culprit of the accident was taken to the hospital to find out what the amount of alcohol in his blood. Meanwhile, place caused it is investigative-task force which will investigate the details of the incident.