In the occupied Donbas forced to obtain Russian passports – Hur 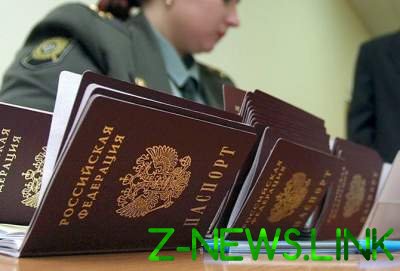 On the territory of the occupied Donbass the Russian command proved the disposal of the personnel of the formations and units of 1 (Donetsk) and 2 (Lugansk) AK the armed forces mandatory for all soldiers of the Russian citizenship.

However, the leadership of the FSB has imposed additional restrictions on the intersection controlled by Ukrainian authorities border with Russia. First of all, restrictions concern persons who are related to the occupation administrations or are serving in the ranks of the Russian occupation forces and in the power structures of the so-called “L/DNR”, the press service of the defense Ministry, citing data from the Main intelligence Directorate of Ukraine.

For this category of persons crossing the Ukrainian-Russian border is possible only if official business with the prior authorization of the Russian side about the time, place and purpose of the trip. In the case of attempts of such persons to travel to Russia on their own, is their meticulous care in the Russian checkpoints, then in most cases the decision banning them from entering Russia.

Prime Minister Volodymyr Groysman said that the Ukrainian government will take a decision according to which Russian passports issued to residents of the occupied Donbass will be declared illegal.