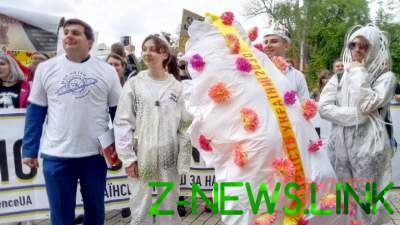 Is street performance “Ukraine without science”.

On Saturday, may 4, in Kiev held a street performance of “Ukraine without science”. In March there were researchers, students and concerned Ukrainians. In a sign that the country in the development of scientific knowledge stagnates, the protesters symbolically launched into space dumpling.

Scientists took to the street in support of scientific reform. Gather for the March men began in Shevchenko Park. At 14:00 the action started – the column went to the Independence Maidan.

The protesters say today’s March is part of a global March for Science. And its main goal is to encourage the Ukrainian authorities to launch a national Research Fund. This institution should be the institution of a new type.

As planned, it will allocate grants to research scientists and the best laboratories through a transparent competition under control. A “ceremonial launch into space the biggest dumpling in the world”, according to them, the symbol of Ukraine and a dystopian future that is too long to question science.