In the heart of new York city were crucified Santa Claus. Video 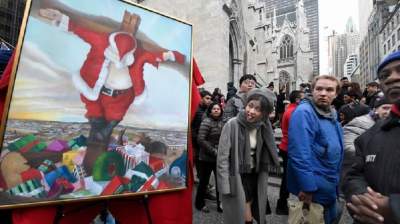 On the eve of the Catholic Christmas in the heart of new York set the caller picture in front of St. Paul’s Cathedral.

Artist Robert Cenedella depicted on the canvas of a crucified Santa Claus. The picture shows that the main religious holiday has become too “commercial”.

Despite the idea, local residents figure rather disappointed than interested.

According to American Catholics, to put these things on the street before Christmas – rude and insulting.

As noted previously, the work of Robert Cenedella removed from the exhibition in the Manhattan gallery.