Home / business / In the Donbass in the fighting were killed, the military

In the Donbass in the fighting were killed, the military 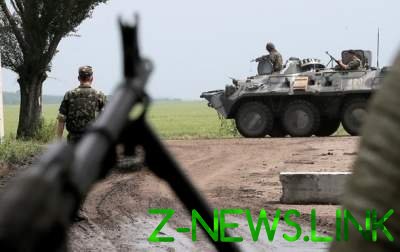 Since the beginning of Friday the separatists four times fired at the Ukrainian positions near Experienced, Novomikhaylovk, Shirokino and Pavlopol.

For the past day, the 9th of August, the separatists 45 times opened fire on positions of Ukrainian Armed forces in Donbas, three of the heavy weapons. As a result of combat action one Ukrainian soldier was killed and two were injured, the press service of the EP on his page in Facebook.

See also:  Russia uses the situation in Lugansk for the escalation of the conflict in the Donbas - defense Ministry

Also, the enemy fired mortars caliber 82 mm VSU positions near Novoluganskogo, Hnutove and Lebedinsky, and in the area of Marinka recorded the work of the sniper group of the separatists.

See also:  The OSCE called the number of victims in the Donbas among the civilian population

Since the beginning of the Friday, August 10, separatists four times fired at the Ukrainian positions near Experienced, Novomikhaylovk, Shirokino and Pavlopol. Heavy weapons were not applied.