Home / business / In the Donbas lists to obtain a Russian passport, Lisyansky

In the Donbas lists to obtain a Russian passport, Lisyansky 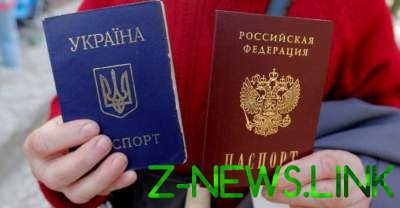 In the occupied territories propaganda about the issuance of Russian passports was carried out during 2 years.

In the occupied territories Luhansk and Donetsk regions, campaigned for getting Russian passports for 2 years and already made a wish list.

“I have such information from partner human rights organizations cooperating with the office regarding the monitoring of human rights violations in the occupied territories, today the lists of people wishing to obtain a passport, are formed. They are after the may holidays actively will start issuing these passports, all this predictable, they are ready for it”, – he said.

“This is clearly a scenario. The occupying administration who work in the Luhansk and Donetsk regions, prepared for it, and this decree is the signal for them to start working. Information of human rights activists, such lists compiled and people were invited to write a statement preliminary that they want to get these passports. These statements were given to the representatives of the occupation administration,” – said Lisyansky.

He noted that in the occupied territories propaganda about the issuance of Russian passports was carried out during 2 years.

“Citizens of Ukraine who are forced to live in the occupied territories in the Luhansk and Donetsk regions, the need for obtaining a passport of the Russian Federation no. If it were, they would campaign not performed, but simply distributed. And so they are forced to spend money and resources to carry out this campaign, people want to obtain these passports. When to begin the active phase of issuing passports, I think it will be an element of pressure, as it was in last year’s elections”, – he said.

See also:  In Russia, the cyclist killed the driver for dangerous driving on the track