Home / business / In the Donbas during the battle, lost the Ukrainian marine

In the Donbas during the battle, lost the Ukrainian marine 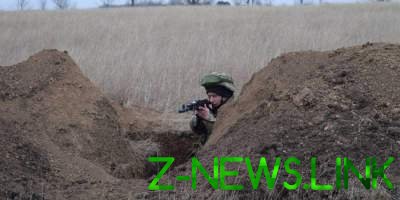 The team noted that the Ukrainian military was lost during persecution and sabotage group of terrorists.

In the Donbas during the battle with militants of the terrorist organization “DNR” near the village of Nikolaevka, the Ukrainian lost a marine.

It is reported by the 35-th separate brigade of Marines on his page in Facebook.

The team noted that the Ukrainian military was lost during persecution and sabotage group of terrorists after they opened fire from heavy machine guns and small arms at the soldiers of the 35th brigade and reserve group, came to her aid.

See also:  In the area of ATO the terrorists 35 times fired at the Ukrainian positions

“During the fight one of our warriors is gone. The district immediately began work a group of search and rescue. At the same time the brigade command of the marine corps appealed to international observers about the establishment of the ceasefire regime in that area. However, the enemy concessions did not go and continued firing, thereby preventing to conduct a thorough search for the missing soldier,” the message reads.

In the brigade of the Marines reported that the body of the missing man could be in the morgue of one of the cities in the occupied part of the Donetsk region.

Note, for the past day in the area of operations of the combined forces of terrorists 11 times violated the ceasefire twice by applying a prohibited weapon.

Losses among the military personnel of the joint forces there. According to intelligence reports the joint forces for the last days one occupant was killed, five were wounded. Since the beginning of the current day attacks on the positions of joint forces is not fixed.