Home / Video news / In the cities of Donetsk held a torchlight procession. Video

In the cities of Donetsk held a torchlight procession. Video 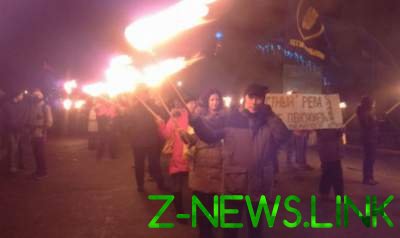 The event was guarded by hundreds of law enforcement officers.

In the frontline cities of the Donetsk region on 1 January took place the traditional torchlight procession on the occasion of the birthday of Stepan Bandera.

It is noted that the event was guarded by hundreds of law enforcement officers. Attended SBU and the chief of the patrol police of Kramatorsk and Slavyansk Alexander Malyuk.

Reported that the police patrolled the district Central hospital, where last year during the procession of the unknown threw an explosive package.

“About 200 marchers chanted slogans “Glory to Ukraine” and “East and West together”. Present extinguished the torches at the endpoint of the procession, near the monument to Taras Shevchenko. There was a rally in which the leader of the cell IN “Freedom” Sergey liseev accused in last year’s explosion of the town’s mayor Vadim Lyakh”, – stated in the message.

It is noted that the Slavic city Council asked the Donetsk district administrative court to ban the use of torches and flammable items during the torchlight procession in the city.

“In his address, the deputies referred to the ban on the use of torches during the stock according to the order of MES of Ukraine dated 30.12.2014. The claim was denied. In this case, the procession was absent fire truck”, – reported in the material.