Home / Incident / In the center of Vinnitsa, a drunk motorist crashed into the tram stop

In the center of Vinnitsa, a drunk motorist crashed into the tram stop 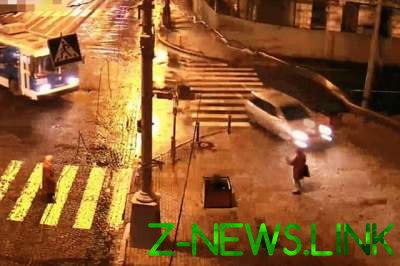 The tragedy of this Kharkiv could happen in the winery.

The drunk driver “Opel Astra” on the morning of 28 October “at speed” driven on the sidewalk at the intersection of Cathedral and Theatre at the tram stop. He nearly knocked down a pedestrian. Lucky at 7: 00 on Saturday there were almost no people.

As reported in Department of communications of GUNP in Vinnytsia region, the patrol noticed that the driver is drunk when the car went down the street Block. The inspectors wanted to stop the driver, but he only accelerated. The chase began… On the street of the Cathedral, the offender lost control and drove into the pedestrian area of the square of Heavenly hundreds, barely missing the man, who was walking on the sidewalk. Moreover, he did not even have time to react.

Then came two cars – the driver and passenger and tried to escape, but the regional drama theatre patrol with national guardsmen detained the fugitives. The driver examination showed that his blood was 0,77 ‰ of alcohol. 25-year-old made three of the Protocol under article 130 (driving while intoxicated), part 2 of article 122 (violation of rules for use of warning signals) and article 122-2 (failure stop at the demand of the police).

Read also: Accident in Kiev with the participation of four cars: there are victims

See also:  Human right activists: Banning Russian athletes on the principle of collective responsibility is unacceptable as violating the right to a fair trial

The communications division to clarify that in the month of October, the police recorded 154 cases, when people drove a car while intoxicated, and for 7 months of this year, 1777 stopped such violators.