Home / FUNNY NEWS / “In the center of Donetsk is the place of the skull!”: in the Network are laughing at posters in the “DNR”

“In the center of Donetsk is the place of the skull!”: in the Network are laughing at posters in the “DNR”

The leaders of the “DNR” want to send to Dom-2.

In the temporarily occupied Donetsk and several other cities there were posters announcing the casting for participation in the Russian reality show “Dom-2”. Residents of the occupied territories has expressed a desire to send the “Dom-2” of the leaders of the so-called “DNR” Zakharchenko and Pushilin.

The organizers of the scandalous Russian reality show “Dom-2” was pasted posters that indicate that are looking for participants to participate in “the project” living in the occupied part of the Donetsk region. You know, “Dom-2” is a scandalous program, in which young men and women trying to build their relationship in the eyes of the public.

In social networks locals published a photo of the ad in which residents are invited to the casting in the occupied Donetsk and wishes to send to the leaders of the so-called “DNR” Alexander Zakharchenko and Denis Pushilin.

However, some offer to send them as “girls” — “and Sasha Putilina”:

“Pushilin send”,
“We’ll fly someone in this picture Zakharchenko in the form of”,
“In the center of Donetsk will be the frontal Place!”
“12 coolest guys on the project “Dom-2″ with them, Sasha is a male, and Denis Pushilin”,
“Right tale “Twelve months”. I do not see them snowdrops”.

The stylistics and spelling of authors are saved. 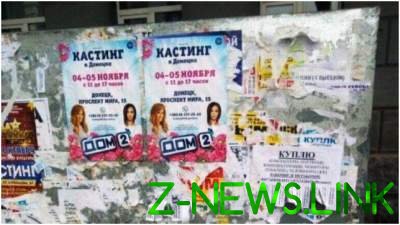