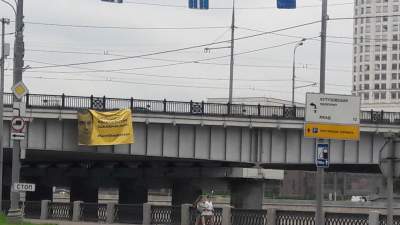 Near the building of the Russian government there is a banner.

In Moscow near the building of the Russian government hung a banner in support of Ukrainian Director Oleg Sentsov.

It is noted that the action was held by activists of the Moscow branch of the “Open Russia” with the requirement to release all political prisoners.

From may 16 Oleg Sentsov was on a hunger strike demanding the government to release all detained Ukrainians.

5 Jul cousin. Natalia Kaplan met him in a Russian prison. After the meeting, Caplan announced that Sentsov “thinner and much older”.

July 19 it became known that Sentsov rebuked the Ukrainian authorities and personally of the Ombudsman Lyudmila Denisova in the fact that they “ended the active campaign support of Ukrainian political prisoners.”