Home / Video news / In Tbilisi has passed the anti-Russian campaign, with chants about Putin. Video

In Tbilisi has passed the anti-Russian campaign, with chants about Putin. Video 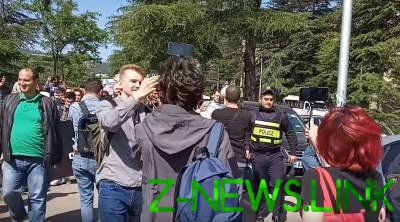 Civilian activists held in the Georgian capital of counter-action under the slogan “let’s celebrate genocide”.

May 9, in the Georgian Tbilisi, an attempt was made to conduct the first March “Immortal regiment”, but in stepped the activists who opposed the Pro-Russian conduct of the event.

According to the local press, civil society activists held in the Georgian capital of counter-action under the slogan “let’s celebrate genocide”.

In the video, posted online, shows how a group of people chanting the famous chant about Russian President Vladimir Putin – “Putin h**lo”.

Local media reported that in place also mobilized the police, security outfits. Not without detention.

Participants of a March “Immortal regiment” was able to get to the Vake Park with portraits of Josef Stalin and placards in support of rapprochement with Russia.