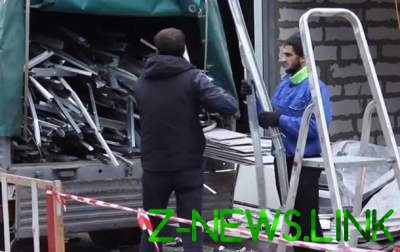 The traders held a protest rally, but “the authorities” did not respond.

“When he took off the roof of your pavilion, the product was inside. We appealed, but they do not expect. Did they give us such a gift for the New year. Those of us who remain without work, more than thirty people. Yesterday there was a rally, but they still” – said the seller of one of trading pavilions.

Earlier in October the “government” of Sevastopol has announced the list of objects that are to be dismantled, among them were the pavilions at the market of Moscow.

According to the document, illegal call and a few houses on the streets Artdiviziona, Heroes of Brest Musketeers, as well as garages, hotels, bars, additions to restaurants and surrounding areas.

A total of 25 September the “government” reported on the presentation of the Sevastopol businessmen over 400 notifications on the dismantling of commercial properties, which local authorities considered illegal. For the elimination of such facilities in the city budget laid 10 million rubles (about 4.8 million).