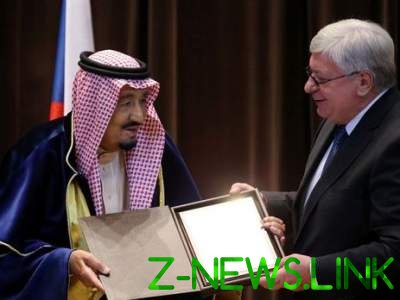 King of the Arab countries have received prestigious awards.

Rector of Moscow state Institute of international relations Anatoly Torkunov said that Russia and Saudi Arabia play a significant role “in promoting stability in the Middle East and the entire Eurasian continent.”

The king of Saudi Arabia Salman bin Abdul Aziz al-Saud, who is currently on a visit to Moscow, awarded the title of honorary doctor of Moscow state Institute of international relations (MGIMO), the website of the University.

MGIMO rector, Anatoly Torkunov said that Russia and Saudi Arabia play a significant role “in promoting stability in the Middle East and the entire Eurasian continent”, and the title of king of the Saudis awarded “for his enormous contribution to the strengthening of international peace and cooperation” between Russia and Saudi Arabia.

“With deep gratitude I would like to Express my sincere gratitude to the University for awarding me the title, which I’m happy to accept your famous University, famous for its glorious history as a powerful beacon of science and education”, – said in response to al-Saud.

MGIMO honorary doctors at different times were presented to the President of France Nicolas Sarkozy, the President of Armenia Serzh Sargsyan, the Prince of Monaco albert II and President of Turkey Recep Erdogan, the former UN Secretary-General ban Ki-moon.