Home / FUNNY NEWS / In Russia, victory Day has released a “beer tank”, and a soft doll in the form of a veteran

In Russia, victory Day has released a “beer tank”, and a soft doll in the form of a veteran 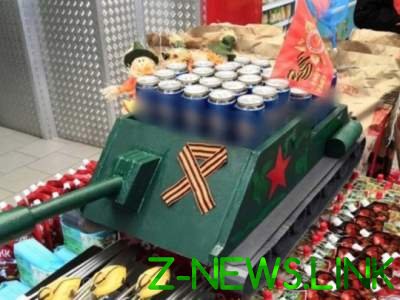 Many Russians toy in the form of the participant of the great Patriotic war seemed to many blasphemous.

The Network broke the scandal because of the toys that were released in Russia on 9 may. In particular, some online stores offer soft doll “Veteran”.

“The toy is made from soft-touch, high-quality textiles. The doll will remind you of the exploits of our grandfathers and enhance the Patriotic spirit of a child” – describes the product manufacturer.

Many Russians toy in the form of the participant of the great Patriotic war seemed to many blasphemous.

“It’s edge”, “What a mockery of a great Victory?!”, – outraged Network users.

Veterans themselves this souvenir is also caused outrage. The President of the Russian Union of veterans Mikhail Moiseev said: “Every time May 9, necessarily some destructive forces out such filth and dirt, profiting from it, making all sorts of obscenities that discredits what was done by our grandfathers and fathers. Show, that’s what we have remaining decrepit veteran.”

Also Michael A. has proposed to conduct a RAID on the stores to find similar products, seems to be dedicated to the great Victory, and in fact is insulting her.

See also:  In Russia again will go on trial the teacher who wrote verse about Ukraine

Employees of the online store where I first found the doll “Veteran” was unable to give a clear review. Incidentally, this product they have disappeared from the market.

Another similar case recorded in the city of Noyabrsk in the Yamalo-Nenets Autonomous district (YNAD) where Victory Day in one of the local grocery stores were decorated stand.

In the picture, posted by a user VC, seen the construction of a Soviet self-propelled artillery or a tank, decorated with St. George ribbon and red star, inside it, there are beer cans, and around – packing of ketchup and barbecue skewers.

Netizens have supported the author of the entry. “It is a pity that we do not have bodies, fined for improper use of the St. George ribbon symbol of Victory,” said one. “Men, what are you on? Where moral principles? What you were taught in school? (…) It is not necessary to do advertising, we don’t know what war is, and God forbid not knowing. There must be respect for those who gave life so we could live,” said another.

Reporters noted that speculation about the Second world war and victory reoccur every year. Most often they are commercial in nature (the massive sales of military uniforms, caps, flasks, ribbons, helmets and even gas masks). But sometimes people just changes the feeling of respect, tact and measures. So, in 2015, the scandal broke because of a cake contest for Victory Day, which took place in Krasnoyarsk. Won Nadezhda Saburova, which introduced a three-tiered cake with images of the tragic scenes of war and decorated “memorial” Cup. Also, the pastry chefs were making cakes in the form of charred soldiers ‘ letters, monument “Motherland”, tanks etc. for some reason, neither the participants nor the organizers will not feel self-durnovkusiya, and blasphemy.