Home / Incident / In Russia there was a large road accident: there are victims

In Russia there was a large road accident: there are victims 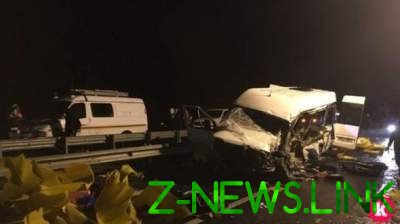 Seven people were killed and eight injured in the collision of a Mercedes SUV and a van near Kaliningrad in Russia. About it reports a press-service of the regional Department of internal Affairs.

According to local media reports, among the dead was a pregnant woman.

In the control Center in crisis situations of the Ministry said that among the injured ten-year-old girl who was in a Mercedes with their parents. Six people taken to Hospital of an emergency medical service of Kaliningrad, one in the hospital of the city of Gvardeysk. After the examination, the child was released home.

It is noted that the van to accommodate 18 seats, there were 14 passengers.

According to preliminary data, the cause of the accident was the travel into the oncoming lane of one of the cars, the result was a head-on collision. Most victims were in the minibus, said the Ministry of internal Affairs.