Home / phones / In Russia there are cheap tablet BQ-7082G Armor

In Russia there are cheap tablet BQ-7082G Armor

In our country announced a new tablet computer BQ-7082G Armor cost less than 5,000 rubles. This is a budget solution based on the Android OS, and it is available in quite a brutal case with stylish prints on the back panel, one example of which is depicted on the attached render. 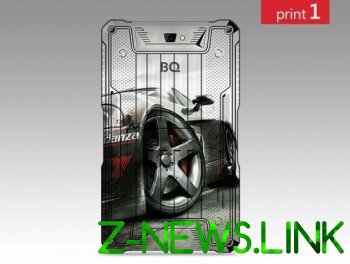 Tablet BQ-7082G Armor is estimated only 4,000 rubles and comes with a screen of 7 inches that supports a resolution of 1024×600 pixels. The computer case is made of plastic and hides the battery capacity of 4100 mAh time battery life, a microSD slot under the memory cards up to 32 GB, and two slots for SIM-card, so you can use the gadget as smartphone, and even surf the Internet via the cellular networks of the third generation.

Despite the very low cost tablet BQ-7082G Armor right out of the box running on Android 7, one of the most modern. In the Arsenal of the tablet has 1 GB of RAM and 8 GB of internal memory, cameras resolution 2 MP front and 5 MP for the main, and a processor with a clock frequency of 1 GHz on four computing cores. And another important fact: BQ-7082G Armor can be used as an external battery for charging other devices.