Home / business / In Russia, the Deputy beat up a motorist in front of police

In Russia, the Deputy beat up a motorist in front of police 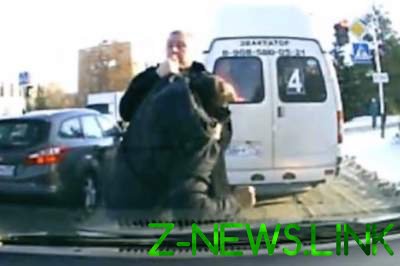 MP of the year Kartaly Chelyabinsk region Sergey Galeev attacked the driver of the vehicle to prevent it, according to U24.ru. The brawl came to a recording from the DVR.

According to witnesses, 25 Oct Gidaev in his car made on the road inadequate maneuver, from-for what there was an emergency situation. The driver of the Nissan overtook him from the left side to avoid collision.

When both cars stopped at a traffic light, the Deputy got out of his car, pulled the driver of the Nissan and began to beat him. The fight was stopped by the appeared in time police officers, which, however, did not arrest the MP and make the report. Then Gidaev returned to his car and drove away in an unknown direction.

Beaten driver has addressed with the statement to the police. In the main Department of internal Affairs of the Chelyabinsk region said that the district conducts a review of the incident.

The MP told reporters that “scared” manoeuvre of the driver of the Nissan. According to him, he damaged his car’s wing and he marks asked to stop. After that, the driver allegedly began to insult him. Gidaev also noted that the victim in the fight, tore his coat.

See also:  In Nikolaev the teacher beat up a 4 year old child in front of mother. Video

“You would, of course, apply to the court for the torn coat and damaged the fender of the car, but it’s beneath my dignity,” said Galeev. The question U24.ru about who started the fight, the Deputy did not answer.