Home / policy / In Russia showed “a defector from the security service”

In Russia showed “a defector from the security service” 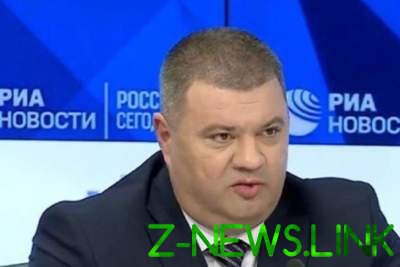 The man said that he worked at SBU since 1999, and in April 2014 began to cooperate with Russian intelligence services.

In Russia in day of the SBU on Monday, March 25, was held the press-conference of Vasiliy Prozorov, who is known as a defector from the security Service of Ukraine.

“My name is Prozorov Vasily Nikolaevich. From 1999 to 2018, I was the employee of security Service of Ukraine, and in may 2014 I worked in the Central office, namely at the headquarters of the antiterrorist center of the SBU. Since April 2014, I absolutely voluntarily for ideological reasons supported the security services of the Russian Federation in obtaining information about the activities of Ukrainian law enforcement agencies, particularly in the area of ATO”, – said the man.

He stated that he had access to the classified information, concerning the antiterrorist operation in the Donbass, and even attended closed meetings of the Council.

See also:  In Russia, the ATMs have a virus

The man said in particular that the disaster Malaysian Boeing in the Donbass involved with the Ukrainian side. “My personal belief, it is supported by the evidence, the crash of the Boeing sacrament of the Ukrainian side,” he said.

His “personal belief” Prozorov explains that after the fall of Boeing followed by a “phenomenally fast reaction of the Ukrainian leadership.” “Definitely had the impression that President Poroshenko and his press office knew in advance about it,” he said.

Also Prozorov said that Kiev initially allegedly assumed a large number of victims among the population of Donbass, which would declare accomplices of terrorists.

Also, ex-Sbushnik told that in a combat zone in the Donbass Ukrainian supposedly there are secret prisons, one of which is at the Mariupol airport. He assured that within their walls there is a lot of murders that allegedly lie on the conscience of the regiment Azov.

The defector also revealed that the SBU allegedly conducting an operation “spiders in the Bank”, which aimed at discrediting the authorities of the self-proclaimed “LNR” and “DNR”. According to him, eliminated all the leaders of the separatists allegedly the result of the work of the SBU.

In the SBU stated information not yet commented.