In Portugal stopped car race due to a massive accident 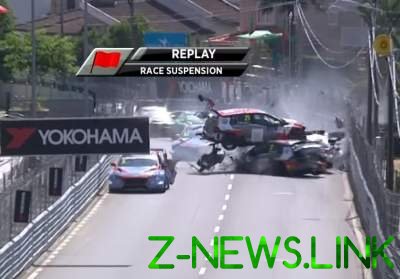 On the highway congestion from broken machines.

Due to a serious accident on the first lap the race was stopped WTCR series on the street circuit in the Port. Faced teammates Sebastian Loeb Racing — Briton Rob Huff and Moroccan Mehdi Bennani, the speakers on the hatchback Volkswagen Golf.

They crash on a narrow city track set off a chain reaction in the blockage got more than a dozen cars. Six of them received very serious injuries, and Volkswagen Golf Robert Huff was almost completely destroyed. Blow he tore the engine together with the front spars, and because of an oil spill the fire started — however, it was quickly put out.

From the strongest blow Bennani lost orientation in space and got a hematoma on his head. Huff got off to strong injuries of the muscles and the coccyx. Both sent to the hospital: fortunately, serious injuries examination was normal. Both will be able to participate in the next stage WTCR in Slovakia.

The only one who managed to slip past the accident, was Norbert, Mihelic. But its Hyundai i30 touched Huff’s car, so Hungary scored the gathering. The race had to stop red flags for two hours. During this time the team managed to repair the affected machine, and on re-start there were 19 cars.

The FIA world Cup WTCR — new body series, which replaced the official WTCC game and the series TCR. Unlike the WTCC, it involves private teams on a relatively affordable and simple technology.

All cars are front-wheel drive, a turbo engine equipped with serial two-liter capacity of 340 horsepower. Suspension racing, but the diagram and the points of attachment of the repeat serial.