Home / INCREDIBLE / In Peru archaeologists have discovered a shocking discovery

In Peru archaeologists have discovered a shocking discovery 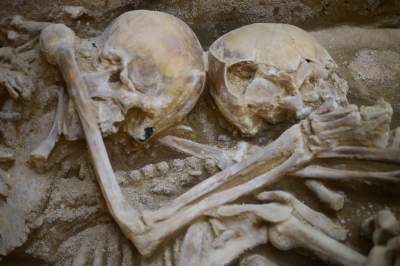 In Peru, found the skeletons of men, sacrificed about 1000 years ago.

A group of archaeologists from Peru and Japan found 700 km from the capital of Lima in the tomb with the remains of nine men who were sacrificed during a religious ritual.

Also in the sanctuary was discovered a metallurgical workshop and a tomb with the burial of the elite. Age finds – about 1000 years, they are Cicansky culture.

Scientists claim that men who sacrificed, there were about 25-30 years. In the tombs were also discovered a lot of pottery and knives.

It is believed that representatives Cicansky cultures were merchants and skilled artisans working with metals and ceramics, and died after a serious drought that lasted for 30 years. They were the predecessors of the Incas and lived on the North coast of Peru between 750 and 1375 ad